How to spot the rare ‘green comet’ everyone is talking about 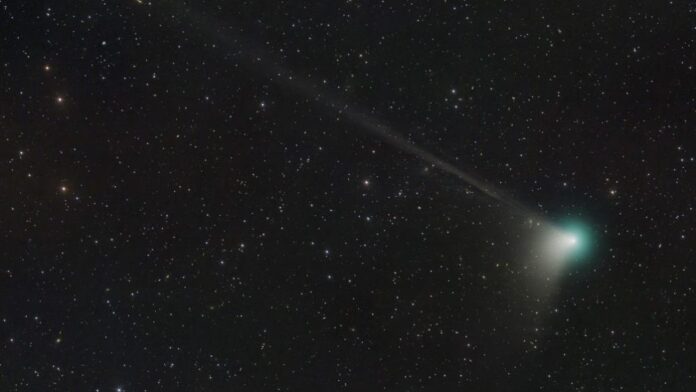 A comet not seen since early Homo sapiens roamed the Earth is making its way across the sky.

Comet C/2022 E3 (ZTF), which is also being called the ‘Green Comet’, will make its closest pass to our planet on February 1.

And like other comets that have long-orbital periods, it doesn’t come around very often.

In fact, the ‘Green Comet’ last paid a visit to the inner Solar System 50,000 years ago, around the time Stone Age humans were thought to have first begun developing language.

And due to the nature of its orbit, it may never visit the inner Solar System again – meaning this could be humanity’s last chance to set eyes on Comet C/2022 E3 (ZTF).

Luckily for sky-watchers, there is still ample opportunity to catch a glimpse of what is being hailed as the best comet of 2023.

The comet was discovered in March 2022 by astronomers conducting a wide-field sky astronomical survey at the Zwicky Transient Facility in California in the United States.

Since then it has brightened substantially, and can be spotted in the sky from the northern hemisphere early in the morning.

It already made its closest approach to the Sun, known as its perihelion, on January 12, while its perigee (its closest pass of Earth) will occur on February 1.

It became brighter as it passed the Sun, as the star’s radiation heated it up, creating a green coma – the hazy envelope of gas from heated materials such as water, carbon dioxide and carbon monoxide.

It also has a short broad dust tail, and a longer, faint ion tail, created when the solar wind interacts with the comet’s coma.

The green glow is a result of UV radiation from the sun lighting up the gases that are streaming off the comet’s surface.

C/2022 E3 (ZTF) is thought to have come from the Oort Cloud, a region around the outer solar system that is thought to contain billions of comets that are mostly in a stable orbit around the Sun.

How to spot the ‘Green Comet’

It can currently be viewed in the early morning (pre-dawn) sky from the Northern Hemisphere with a telescope or binoculars.

It may however be faintly visible with the naked eye when it reaches perigee at the start of February. At this point, it will be around 42 million km from Earth, and also visible from the Southern Hemisphere.

NASA cautions that comets – and their visibility – are notoriously unpredictable.

According to the Royal Observatory in Greenwich, London, C/2022 E3 (ZTF) isn’t predicted to form a tail that’s visible without a telescope, but this also may change.

For now, the comet looks like a fuzzy green ball in the sky.

The observatory advises that the comet will be “easily visible” with a telescope or binoculars from now until after its perigee, with the best visibility in the pre-dawn hours.

From the end of January to early February, it will also be visible from the evening onwards.

You can find out where in the sky the comet will appear by using a stargazing app.

To avoid disappointment when trying to see it in the night sky, ensure there won’t be too much cloud cover, ensure you have a view of the correct part of the sky from your vantage point, and wrap up very warm before heading out, the observatory said.

It added that you should allow your eyes to adapt to the darkness for at least 15 minutes, and avoid looking at mobile phones or other bright devices so your eyes remain sensitive enough in the dark.