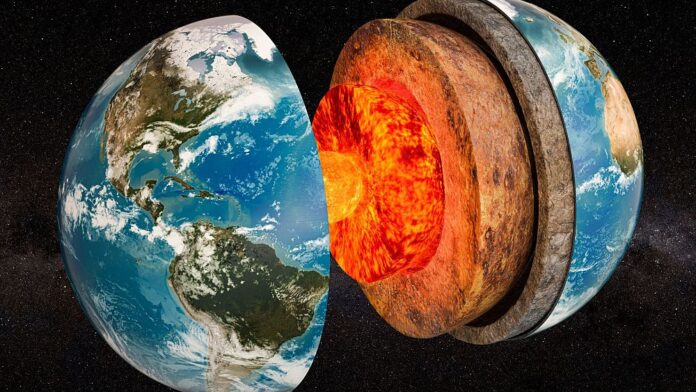 The Earth’s core may have stopped spinning, or may even now be spinning backwards, according to a new study.

The core of our planet is made up of an outer layer of liquid metal, and an inner core of solid metal that is about 70 per cent the size of the Moon.

It is generally believed that the core rotates counter-clockwise when viewed from the North Pole, like the rest of planet Earth.

But a study analysing seismic wave data over the past 60 years by researchers at Peking University in China has concluded that the core’s rotation stopped around the year 2009, and then restarted in the opposite direction.

“We think that the core is, relative to the surface of the Earth, rotating in one direction and then the other, like a swing,” Xiaodong Song and Yi Yang, the study authors, told AFP.

A complete cycle (in one direction and then the other) of this swing is about 70 years, they added.

According to the researchers, the last rotation change before 2009 would have occurred in the early 1970s, and the next one will take place in the mid-2040s.

There is still much debate about the nature of the Earth’s core, because gathering information on it is extremely difficult.

The edge of the outer core meets the Earth’s mantle at a depth of around 2,890 km, and this outer core is believed to be made of liquid iron and nickel.

The inner core starts around 5,000 km below the surface of the planet, and is thought to be made of solid iron and nickel, due to the extreme pressure forcing the atoms of the metal to pack together.

It sits within the liquid outer core, and is believed to have been rotating in the same direction as the rest of Earth, based on analysis of seismic waves caused by earthquakes.

Xiaodong Song and Yi Yang studied these seismic waves, finding an associated “gradual turning-back of the inner core as part of an approximately seven-decade oscillation”. Their paper is published in the journal Nature Geoscience.

“This is a very cautious study carried out by excellent scientists who used a lot of data,” said John Vidale, a seismologist at the University of Southern California who was not involved in the research.

However, he added that “none of the existing models really explains all the available data well”.

Vidale published a study last year suggesting that the inner core oscillates much more rapidly, changing direction about every six years, according to seismic data from two nuclear explosions dating back to the late 1960s and early 1970s.

Another geophysicist, Hrvoje Tkalcic at the Australian National University, believes the cycle of the inner core is about 20 to 30 years, rather than the 70 years proposed by this week’s study in Nature Geoscience.

The Peking University researchers claim in their paper that this oscillation “coincides with changes in several other geophysical observations,” such as the length of days, and changes to the Earth’s magnetic field.

“These observations provide evidence for dynamic interactions between the Earth’s layers, from the deepest interior to the surface, potentially due to gravitational coupling and the exchange of angular momentum from the core and mantle to the surface,” they write.

“We hope that our research motivates researchers to design and test models treating the Earth as an integrated dynamic system,” they explain.