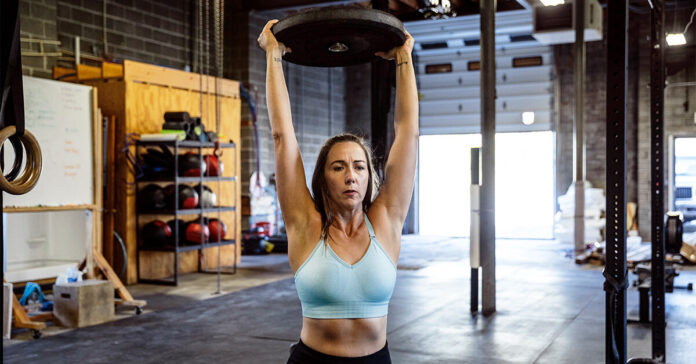 Researchers looked at almost 100,000 participants from the that began in 1993 and ran for nearly a decade.

It included men and women aged 55 to 74 from 10 different cancer centers in the United States.

They said just one or two sessions a week led to a 14-percent lower risk. Moderate to vigorous aerobic activity alone was associated with a 24 to 34 percent lower risk of death from any cause.

The lowest risk of death was in those who did both types of physical activities, falling 41 to 47 percent for subjects meeting most recommended weekly levels of moderate to vigorous aerobic activity while using weights once or twice a week.

“The interesting part of this study is that while people who both lifted weights and did aerobics had the highest decrease in mortality risk, aerobic exercise seemed to be the primary driver of this effect,” Candy said.

“These findings indicate that both weightlifting and aerobic exercise are good for preventing mortality, [but] there’s no interaction effect between the two,” Candy added. “It’s not a situation of ‘the whole is greater than the sum of the parts.’ In this case, the net effect of doing both exercises is exactly the sum of doing each type of exercise individually.”

Matt Claes is the head coach and founder of the personal coaching company Weight Loss Made Practical. He agreed both weightlifting and aerobic workouts have their own specific benefits that overlap and contribute to longer lives.

“Since this reduces the risk of heart disease and since heart disease is one of the leading causes of death, it makes sense that cardiovascular workouts like running can help you live a longer life,” Claes told Healthline. “On the other hand, weightlifting is helpful for growing and strengthening skeletal muscles.”

Claes pointed out weightlifting improves bone density, which becomes an issue as people get older.

“Many people will be surprised by it but falling is actually also a very common cause of death,” Claes noted. “By strengthening and improving endurance in your muscles, you reduce the risk of falling itself. The bone-strengthening aspect of lifting weights also makes the negative consequences of falling less bad.”

Dana Hunnes, an assistant professor at the Fielding School of Public Health at the University of California Los Angeles and an avid runner, cycler, swimmer, and dietitian, told Healthline the benefits of combining cardio and weightlifting for older people go well beyond simply “using it or losing it.”

“Weightlifting seems to be more effective than just walking because it is increasing lean mass and likely also has effects on balance, which we know has effects on overall health,” Hunnes said. “They found what appeared to be a synergistic effect of both weightlifting and aerobic activity such as walking or jogging as well. There is a combined effect when both were done as opposed to just one.”

The study also said muscle growth is associated with more hormone release, which Hunnes told Healthline could also lead to a longer life.

“When you have more lean mass and muscle growth, you are able to utilize glucose more effectively, you are able to regulate your hormones more effectively and it may be that there is some sort of synergistic effect of more lean mass and hormonal regulation that increases longevity or decreases the risk of early death from chronic disease, like diabetes, for example,” she said.

“I believe more women should be prescribed weight training, particularly as they get older,” Mitchell said. “After menopause, women are more likely to be susceptible to osteoporosis. Osteoporosis is effectively bone weakening.”

Mitchell said, while some older women may turn to swimming to help, weightlifting is even better because it’s “load-bearing.”

“You want load-bearing exercises because that’s what strengthens your bones,” he said. “So, the optimal exercise regime for a 50-year-old woman, or older, should include two bouts a week of resistance training, 45 minutes at a time – nothing more.”