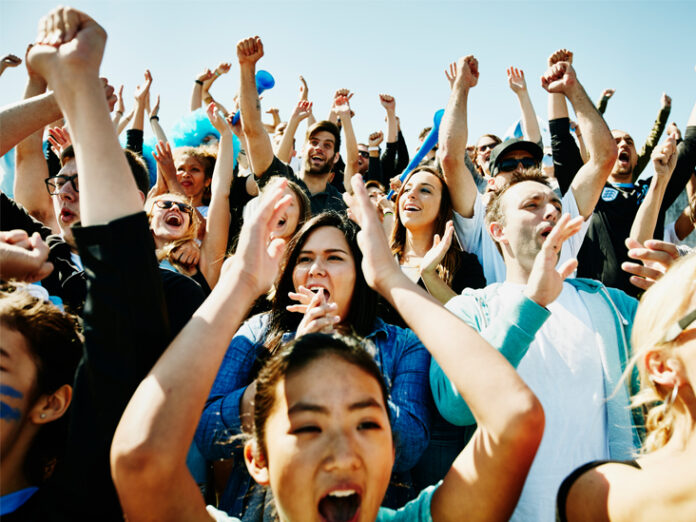 In the book he co-authored with Ben Valenta, senior vice president at Fox Sports, the authors argue that fandom is a social good with the potential to mitigate the loneliness epidemic in the United States.

While the authors suspected sports fans to experience some degree of belonging, they were surprised to find a lonelier, more polarized population than they expected, and through research, they discovered that fandom may offer more meaningful, impactful benefits.

For instance, they found that while 61% of Americans report experiencing loneliness, non-fans may be lonelier than fans.

“To examine that idea, we developed a more testable hypothesis: if being a sports fan is about community, then more engaged fans will have more friends than non-fans/less engaged fans. And through multiple surveys across tens of thousands of Americans, we proved that out,” said Sikorjak.

If fans have more friends, it stands to reason that they would feel less lonely, added Valenta. The authors tested this proposition using the UCLA Loneliness Scale, a 20-item scale designed to measure one’s subjective feelings of loneliness as well as feelings of social isolation.

To understand how fandom helps with loneliness, Valenta said to think about a Fan Flywheel, which is a positive feedback loop where there are two variables: X and Y.

X influences Y, and Y then, in turn, influences X, which creates a positive feedback loop that sustains momentum and creates energy.

“Essentially, you lean into your fandom, you participate in fan activities, you engage as a fan; that’s the X in this example. And that creates the positive feedback of social interactions, the Y variable, which incentivizes you to lean into more fan activities, more fan engagement, which only then begets more social interaction,” Valenta told Healthline. “Once it starts to spin, it takes over.”

“And it might not come right away, but as you participate in your fantasy football leagues, and you go to games with your friends, and you invite the family over for the game, etc., you will begin to experience more belonging in your life,” he said.

Other key findings they discovered include:

For those who aren’t into sports but find fandom in other forms of entertainment like cosplay, conventions, comics, movies, video games, and beyond, Paul Booth PhD, professor of media and cinema studies at DePaul University, said you still might reap similar feelings of belonging and community.

“Being part of any group helps people feel connected, which is a major component of our mental health. When you’re not as lonely, you tend to have a higher positive mental health,” he told Healthline. “Fandom is about being part of something larger than yourself. In some ways, it’s also about feeling like you matter.”

Over the past decade, he said fans have become an integral part of the media landscape via social media, which has allowed them to speak to producers, influence decisions, and in some cases, find jobs in the industry.

“[And] maybe in some ways, feeling productive helps people,” he said.

He distinguishes being a fan, which is liking something and having an emotional reaction to it, from fandom, which is sharing that affinity with a group of people. Moreover, he added that fandom is often a smaller group within a larger circle of fans.

“There isn’t one fandom for Star Trek or Marvel; it’s lots of little pockets of fandom that collectively look different from each other,” Booth said.

The internet has allowed more people to be part of a variety of fandoms. However, Booth notes that some fandom groups can be toxic.

“They can be very angry and misogynist, racist in some ways, and fans might not feel welcome in that sort of a group,” he said.

Valenta agreed that a myriad of shared interests can anchor and galvanize a relationship, and he promotes healthy connection in any form.

However, he believes that sports are uniquely positioned to generate connections.

“Sports are the entryway into discussions of life. Yes, you will talk the ins and outs of the game, and that is good in and of itself, but with the strengthening bond formed as a result of sports, the opportunities for deeper and more meaningful conversations unfold,” he said.

This is the case with other forms of fandom, noted Booth.

However, he pointed out that sports is community-driven, so people tend to be fans of the sports teams where they live, go to school, or to which they have some sort of connection. He said this often isn’t the case with media fandom.

“Also, sports fans tend to be not just fans of their team, but anti-fans of other teams, so part of showing your allegiance or fandom to the Chicago Bears is being an anti-fan of the Packers,” said Booth.

While this occurs a little bit in media fandom, it’s not as strong of a requirement, he added.

“I could be a fan of Star Trek and Star Wars; it’s not like they’re pitted against each other,” said Booth.

The biggest difference he noted between sports fandom and other forms of fandom is that sports are readily accepted as a fandom in our culture, whereas media fandom is not.

For example, it’s not considered weird for people to wear team jerseys on the street or for someone to say they’re missing a social outing to watch a game.

Additionally, if you pay for a cable package, part of what you pay for is access to sports viewing without an option to opt out.

“While all fandom brings a similar feeling and sense of affinity, if I said, ‘I can’t go out, I have to stay home and watch the latest episode of Doctor Who,’ people wouldn’t accept that. If I go around wearing my Star Trek t-shirts, people might look at me weird. The idea that everyone who is subscribing to cable is going to help subsidize the Sci-fi network is ridiculous, and that speaks to the fact that these things aren’t valued by our culture,” said Booth.