HomeHealthFor Infants and Young Kids With Eczema This Treatment Can Reduce Symptoms...
Health 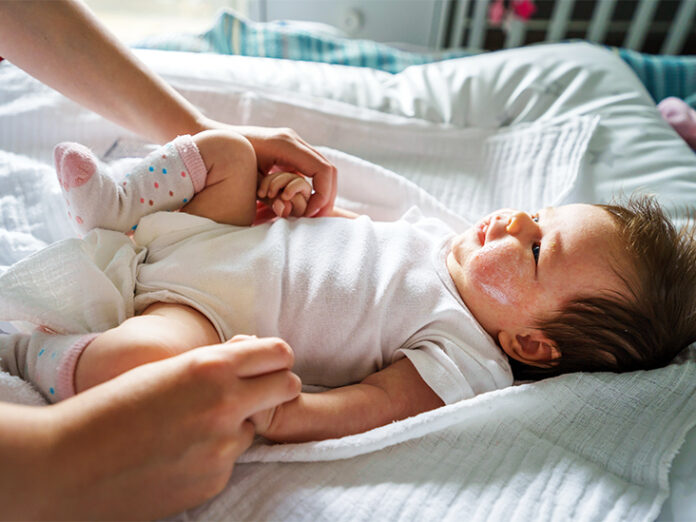 The phase III study, led by Northwestern Medicine in Chicago, Illinois, involved a 16-week course of dupilumab (Dupixent), a medication that targets an immune pathway in allergies. It is one of the first large-scale, randomized, placebo-controlled trials of a monoclonal antibody in a skin disease in children as young as six months, and the study included 31 sites in Europe and North America.

Prescription treatment usually includes topical medication, light therapy, immunosuppressant medications, and biologics. Biologics are genetically engineered proteins that work to target specific parts of the immune system that contribute to inflammatory diseases. Dupilumab, or Dupixent, for example, is the first biologic medication approved by the Food and Drug Administration (FDA) to be used for children ages six and up.

This study, however, was tested in infants and children between the ages of six months and five years old, which is one of the first of its kind to be tested. The medication is already available for adults, teens, and school-aged children, but it had yet to be tested on those under five.

On those tested, it was proven to reduce symptoms by as much as 75 percent, and children were sleeping through the night, many for the first time.

As an added benefit, the medication is also shown to be effective for treating asthma, gastrointestinal symptoms of allergies, but it has not been approved for these symptoms in infants yet.

“With any newer medicine, we always want to watch the development of any new information, particularly long-term safety data,” added Mikhail. “However, the fact that this medication has been successfully used in older children with eczema for two years is reassuring to me.”

Eczema, or atopic dermatitis, is a chronic condition that causes dry, itchy, and inflamed skin.

The condition often begins at a young age, before age five, and can last through adulthood. According to the National Eczema Association, 31.6 million people in the U.S. have some form of eczema. Approximately 9.6 million children under the age of 18 have eczema, and one-third of those have a moderate to severe condition.

Eczema is an uncomfortable condition for anyone, but it’s particularly uncomfortable for children’s young, sensitive bodies. Sometimes the itching can be so severe that it can disrupt a child’s sleep, which, in turn, has negative side effects like poor neurocognitive development.

“The onset of the disease occurs in the first five years of life in 85 to 90 percent of those affected,” said Dr. Rebecca Fisk, a pediatric hospitalist at Lenox Hill Hospital in New York. “In moderate-to-severe eczema, the itch can be very disruptive to sleep and activities and thereby can affect neurocognitive development, like personality effects and irritability.”

According to the National Eczema Association, there is no single treatment for eczema in children, and it is mostly finding out what treatment works best for your child’s symptoms. Common treatments include bathing with a gentle cleanser, moisturizing, bleach baths to reduce inflammation, wet wrap therapy, over-the-counter remedies like mild corticosteroids or petroleum jelly, and prescription treatment.

“Dupilumab works to calm an overactive immune system, but does not suppress the immune system. The drug was very effective in decreasing the signs and symptoms of moderate-to-severe eczema,” said Fisk. “The use of dupilumab for treatment of moderate-to-severe eczema in children as young as six months is very encouraging, as many children who develop atopic dermatitis at such a young age are at risk for developing a second allergic disorder, such as asthma or food allergy. The drug’s effectiveness in quieting itch, which causes a significant impact on quality of life and sleep for the infant/young child and the parents is paramount in the treatment of this chronic condition.”