HomeHealthThe History of Abortion Rights in the U.S.
Health

The History of Abortion Rights in the U.S. 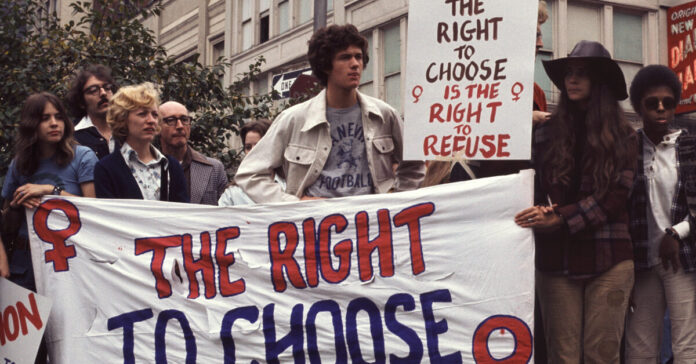 In light of the recent leak, it’s imperative to look to the past to understand how the present is unfolding.

“A lot of people are asking right now, ‘how did we get here?’” says Jennifer Holland, PhD, an assistant professor of US history at the University of Oklahoma and scholar on the anti-abortion movement.

Organized opposition to abortion began more than a century before Roe v. Wade, and it looked very different to the anti-abortion movement as we know it today.

“I think it’s important for people to know that this idea that fetuses somehow have rights is very new,” says Kimberly Hamlin, PhD, a feminist scholar and professor of history and global and intercultural studies at Miami University in Oxford, Ohio. “And what’s even more new is the idea that somehow these so-called fetal rights should trump those of living, breathing women and girls.”

According to historians like Holland, before 1840, abortion was widespread and largely-stigma-free for American women. It was so commonplace that newspapers advertised abortion services to cure “obstructed menses” with herbal remedies.

As was customary at the time, laws reflected British common law. When it came to abortion, the legal system used the quickening doctrine to decide on the legality of abortion.

“Quickening” is generally defined as the moment when the fetus’s movement can be detected, usually around weeks 22 to 24 of pregnancy. Without the tools of modern medicine, this was the only way to confirm pregnancy. Fetuses were only considered potential lives, and the belief of life beginning at conception was not a concept. Before quickening, fetuses were only considered potential lives.

“The key point here is that no one can really tell the woman when quickening has happened because only she herself could know because she’s the one who feels it,” Hamlin says.

Abortions post-quickening were illegal, but only considered a misdemeanor. Historians believe these laws were intended to protect the life and health of the pregnant woman – not the fetus – since abortions performed at later stages required instruments and death was more common than with the herbal concoctions used for abortions pre-quickening. Prosecutions were rare since the only person who could confirm fetal movement was the pregnant woman.

In the mid-1800s, a coalition of male doctors began organizing as a way to separate themselves from the female healers and midwives who also performed abortions.

Before this time, the medical profession was largely unregulated, and a variety of healers competed with physicians for business, especially when it came to women’s reproductive care.

The American Medical Association (AMA) formed in 1847 and argued that doctors had superior knowledge on embryos and the female body and therefore should be the authority on abortion.

Historians note, however, that this heightened knowledge didn’t actually exist and was used as a means to discredit the midwives and healers in order to take control of the market. Another way they did this was by pushing states to pass anti-abortion laws.

“So you have these male gynecologists saying, ‘to have a baby, you have to come see me. You can’t have it at home with your midwife,” says Hamlin. “And part of this is making abortion criminal as a way to push out midwives.”

Their strategies worked, and by the early 1900s every state had made abortion illegal, with exceptions for cases in which the pregnant woman’s life was in danger.

Over the next several decades, abortion remained criminalized at every stage of pregnancy, but that did not stop them from happening. They were simply pushed underground.

Estimates of the number of illegal abortions in the 1950s and 1960s fall between 200,000 and 1.2 million per year, according to the Guttmacher Institute.

Many medical doctors illegally provided medication and surgical abortions, the latter of which became safer with the advent of penicillin. But without any regulation, seeking an abortion could quickly become dangerous and deadly.

One indication of the devastating effect of anti-abortion laws is death tolls during this period.

The Guttmacher Institute reports that unsafe, illegal abortion resulted in the death of 2,700 women in 1930, equating to 1 out of every 5 recorded maternal deaths that year. By 1940, the death toll declined to just under 1,700 and by 1950 to just over 300 (likely due to the introduction of antibiotics). In 1965, deaths due to illegal abortions fell to under 200 but still accounted for 17 percent of all maternal deaths that year. These only account for the deaths that were reported and the number is believed to be much higher.

Then in the 1960’s, Americans began to demand change.

“Illegal abortion became a public health crisis,” Hamlin says. “You have thousands of women dying every year from unsafe back alley abortions.”

The crisis could no longer be ignored, and everyone from physicians to lawyers and even clergy members took note.

“By the early 1970s, the AMA, the American Bar Association, and many clergy band together with feminist activists to say we need to repeal abortion bans,” Hamlin says.

Colorado became the first state to change its law in 1967, followed by California in 1967 and New York in 1970. In 1973, the Supreme Court legalized abortion in all fifty states with the Roe v. Wade decision.

The anti-abortion movement as we know it today, with deeply religious ties, emerged around this time.

“It was a very small movement, largely made up of white Catholics and a smattering of other religious people in the 1970s,” Holland says. “At this time, they’re really developing these arguments that would carry the movement forward. They argue not only that the fetus is a life, but this is also a rights campaign, comparing legal abortion to genocide akin to the Holocaust.”

In the late 1970s and early 1980s, evangelical Christians joined the anti-abortion movement in great numbers, increasing its size and clout.

That’s when abortion became a partisan issue. Realizing the immense voting power of the movement, the Republican Party added an anti-abortion stance to their platform in 1976.

“That was a huge victory, even though the Republican Party would often be tepid allies in the 20th century,” Holland says. “But it was still vital because having a party is the pathway to real political power.”

Over the next couple of decades, Republican leaders like Ronald Reagan won elections in large part to votes from the anti-abortion movement.

In 1992, the Supreme Court, while reaffirming the Constitutional right to abortion, also made it easier for states to pass more restrictive abortion laws with the ruling on Planned Parenthood of Southeastern Pennsylvania v. Casey.

Soon after, the movement began to gain a real political foothold.

“By the mid-1990s to the early 2000s, the pressure really escalates from socially conservative leaders on the Republican party,” Holland says. “And in the 21st century, you can see the outcome of all of this and see how the movement, not ever a majority, but this incredibly important minority, had changed hearts and minds to be completely on board with its ideology. And now not only do they have access to politicians, but they’re being elected to state legislatures and federal office.”

Former President Donald Trump garnered much support from the anti-abortion movement by campaigning to appoint Supreme Court justices who would overturn Roe v. Wade. He fulfilled that promise, resulting in the conservative supermajority on the Supreme Court today.

Following the recent Supreme Court leak, ABC and the Washington Post conducted a poll that sought to quantify where Americans stand on abortion rights.

The results found that 54 percent of Americans think Roe v. Wade should be upheld, while 28 percent said it should be overturned and 18 percent had no opinion.

This means the Supreme Court is poised to overturn a ruling that most Americans wish to keep in place.

“This is not a case where the people have spoken,” Hamlin says. “Sixty plus percent of Americans do not agree with this in any way, shape, or form.”