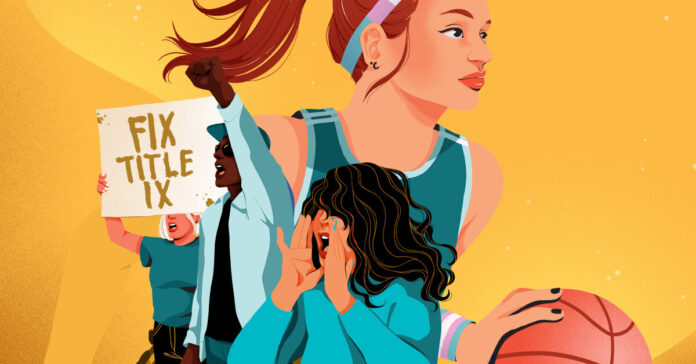 May 2022 research from the Women’s Sports Foundation (WSF) details the progress that’s been made in high school and collegiate athletics since 1972 and identifies inequities in sports that persist today.

Surveying more than 2,300 female participants in sports, the WSF found that while female participation is at an all-time high, females still receive fewer opportunities than men did in 1972 (3.4 million compared to 3.6 million).

About 4.5 million males participate in high school and collegiate sports today, which is just over a million more participants than females.

Karen Issokson-Silver, MPH, vice president of research and education at the Women’s Sports Foundation, explained that WSF examines gaps in access and opportunities for girls and women, particularly those in marginalized communities, including:

“Cultural and gender stereotypes persist in society and they also surface in sport, a microcosm of society,” Issokson-Silver said.

“If we acknowledge that cultural and gender stereotypes permeate everything from education to the boardroom, it’s not surprising that we’d still see some of that impacting the way we structure sports opportunities.”

There’s a notable lack of visibility for girls and women in sports overall.

“Men still dominate the administrative and coaching spaces, so it’s not surprising that boys and men’s sports will continue to be prioritized as long as we have that disproportionate gender equation at all levels of leadership,” she said.

There’s also a notable pay gap between male and female athletes. For instance, female coaches report being paid 60 percent less than men, 63 percent of whom have reported sexual discrimination, according to the WSF.

For instance, WSF research shows a pay gap that’s more than 5 times greater per player on the U.S. Men’s Soccer Team compared to the U.S. Women’s Team: $1,114,429 for male players who win the World Cup, compared to $200,000 for female players.

While the U.S. Soccer Federation agreed to equal pay for men and women in May 2022, the decision was not covered under Title IX and highlights the continued need for equal pay for all athletes.

“Women’s sport needs to be valued economically,” said Nancy Lough, PhD, a professor at the University of Nevada, Las Vegas, and co-director of UNLV Sports Research and Innovation Initiative. “Sport makes a college degree possible for thousands of women each year.”

“The resources given to the men’s football, basketball, and baseball teams far exceeded the resources offered to the women’s track team, which carries the largest number of females in a sport on most university campuses,” she said.

Waite explained that inequities in sports tend to become more disproportionate as athletes climb the ranks, resulting in disparate salary ranges and different public perceptions of the jobs of male versus female athletes.

In addition to being underpaid, marketing and promotional resources in sports tend to favor male athletes over female ones. Waite added that female sports are underpromoted and under-viewed by the public.

The mental health benefits of participating in sports are well documented. A of 30 studies shows that participation in sports improves self-esteem and social interaction and may benefit psychosocial health.

And according to research from 2019, sports teams that include players from diverse backgrounds and experiences may enhance group effectiveness for everyone, regardless of gender.

“When individuals have the opportunity to play a sport they benefit physically, socially, and emotionally,” Issokson-Silver said. “Their mental health and well-being improves dramatically and has an impact on their sense of belonging their school performance, and impacts the trajectory of their lives.”

Yet being denied athletic opportunities because of gender may be harmful to mental health.

Waite recalled that her track and field peers would often say, ‘If I was male, I wouldn’t have this problem,’ with regards to issues ranging from body shaming by the media to financial concerns and lack of support.

“Females have to be prepared for more negative media scrutiny (i.e., Biles, Osaka, and Serena Williams) than males,” Waite said. “This means they have to invest more in their mental health and prioritize the development of skills to manage the mental demands of their sport.”

The vote by FINA prohibits transgender women from competition who have not undergone medical treatments to suppress the production of testosterone before early puberty or age 12 (whichever comes later). The decision is one of the strictest restrictions on transgender athletes in international sports.

With waves of anti-trans legislation blocking access to gender-affirming healthcare in states like Texas, Florida, and Alabama, transgender athletes face roadblocks from lawmakers when attempting to compete on a sports team that aligns with their true gender identity.

Schuyler Bailar, a decorated swimmer and the first transgender athlete to compete in any sport on an NCAA Division 1 men’s team, explained the challenges he faced as an elite-level athlete during his transition.

“I was afraid of losing the potential of success from all of the work I had done training as a female,” he said. “Transitioning meant giving up all of that and starting over [but] swimming as male meant being myself, and that came with all sorts of success for me.”

“That’s why I do what I do and why it’s so important for people — especially non-trans, non-queer people, to get educated about trans people,” Bailar said. “We are all just humans trying to live our best versions of ourselves.”

Earlier this spring, the Department of Education began rewriting key aspects of Title IX that assert the rights of transgender students and athletes.

Changes include reframing Betsy DeVos-era language from discrimination based on “sex” to “gender,” which has been met with criticism by conservatives.

Since the ruling, Block said the courts have been unanimous in agreeing that Title IX protects transgender people and gay people from discrimination.

“My understanding and expectation is that the new regulations and the Department of Education will just keep codifying what the courts have been saying,” Block said.

According to Issokson-Silver, girls and women around the country are advocating to ensure they’re included and welcomed in sports. But advocating for equality doesn’t always solve larger, systemic issues.

Here are a few ways Title IX compliance can be improved overall:

“Girls and women love sports,” Issokson-Silver said. “They’re athletic, they’re strong, they like to have fun and they love competition.

The 50th anniversary of Title IX marked a watershed moment to acknowledge progress in gender equality in sports and bring awareness to inequities that persist.

While strides have been made since 1972 to make sports more equitable, organizations like the WSF work to ensure that women and girls, particularly those from marginalized communities, are afforded the same opportunities as boys and men.

“Title IX has gone a long way toward ensuring that more girls and women can participate in sports, but a whole lot more would be participating if they were afforded the same opportunities as boys and men,” Issokson-Silver said. “Yes, it can be frustrating, but more and more, we see that girls and women are not just sitting on the sidelines — they’re advocating for themselves to make sure they’re getting equal treatment.”