You Only Absorb 2% More Protein From Animals Products vs. Plants 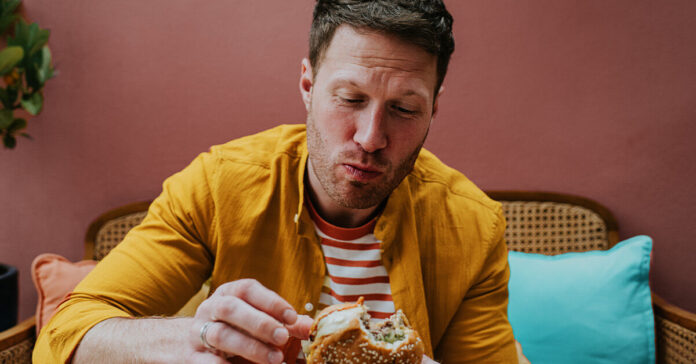 Plant-based meat substitutes are often made with plants containing high amounts of protein, which are dehydrated into a powder and mixed with seasoning.

This mix is then heated, moistened and extruded into its final form.

For this study, researchers created a model meat alternative made of soy and wheat gluten using the extrusion process.

Cooked pieces of plant-based alternative and chicken meat were ground up and broken down with an enzyme that humans use to digest food using “in vitro” (artificial environment such as a petri dish) tests.

For the experiment, Campanella and the team grew a layer of the human cell line that mimics the lining of the human intestine in a dish that was divided into two chambers.

Next, they measured the amount of peptides that passed through the layer of gut cells and into the second chamber. This helped them estimate how much protein may be absorbed in the gut.

“Peptides found in our diet can be naturally available in the food we eat or come from larger proteins that are broken down into peptides and amino acids by the digestive enzymes in the body,” explained Dani Rodriguez-Brindicci, MS, RDN, Director, Clinical Nutrition, Torrance Memorial Medical Center in California.

She added that peptides have many essential biological functions such as anti-inflammation, anti-hypertensive, anti-microbial, and antioxidant properties.

The team looked at the results after 1, 2 and 4 hours, which is the amount of time is generally the longest it takes for food to move through the small intestine.

They found at 2 hours about 8 percent of peptides of the chicken breast protein had moved through the gut cells compared to about 6 percent for the plant-based alternative. At 4 hours it was about 23 percent to about 21 percent respectively.

“Our in vitro tests have shown that the profile of essential amino acids of meat analogs after digestion and absorption is slightly inferior than those from chicken,” said Campanella.

“But still, the profile is suitable and can complement a balanced and healthy human diet,” he confirmed.

“In our work, we used a basic formulation including soybean and wheat proteins,” said Campanella. “However, proteins can be sourced from other legumes.”

He said these include navy beans, kidney beans, lima beans, chickpeas, lentils, peas, and cereal proteins, among others, “that supply a variety of demonstrated nutritional benefits.”

According to Campanella, his team is working on these potential alternatives to find optimized formulations and processing conditions.

Their goal is “to achieve products with desirable organoleptic, nutritional properties as well as competitive price,” he said.

Rodriguez-Brindicci said that although some plant-based meat alternatives can be highly processed and high in sodium and saturated fat, obtaining protein from whole, nutrient-dense plant foods such as legumes, nuts, vegetables, seeds, and grains has many long-term health benefits.

She added that whole-plant proteins often contain less saturated fat and cholesterol than many animal proteins, which can lower cholesterol and reduce the risk of cardiovascular disease.

According to Rodriguez-Brindicci, while plant-based meat alternatives have become an increasingly popular health and environmental trend, there are many misconceptions about the nutritional value of these “meatless meats.”

“In fact, a majority of these plant-based meat alternatives brands have drawn in customers by advertising their products as tasting nearly identical to animal-based proteins,” she said. “While also being high in protein and low in saturated fat and cholesterol.”

However, she explained that for these meat alternatives to taste similar to animal products, “binders” are often used to hold plant proteins together and mimic the texture of meat.

These include xanthan gum, carrageenan, methylcellulose, food isolates, and extracts that are added to the product.

Rodriguez-Brindicci cautioned that these additives make the food much less healthful than other meat alternatives that are made with whole plant-based foods such as beans, rice, mushrooms, and vegetables.

“Also, many of these processed meat alternatives can be high in sodium, and some are made with oils such as coconut oil or palm oil, which are high in saturated fat,” she said.

Rodriguez-Brindicci emphasized the importance of reading food labels of these products to decide if the plant-based meat is a healthful choice or should be consumed in moderation.

A new study finds that plant-based meat proteins aren’t digested quite as well as those from chicken breast, although the difference is slight.

Experts say plant-based diets have many health benefits, and there are many vegetable protein sources to choose from.

They also say that we should carefully read ingredient labels of meat alternatives to know whether additives have been used that might make the product less healthful.