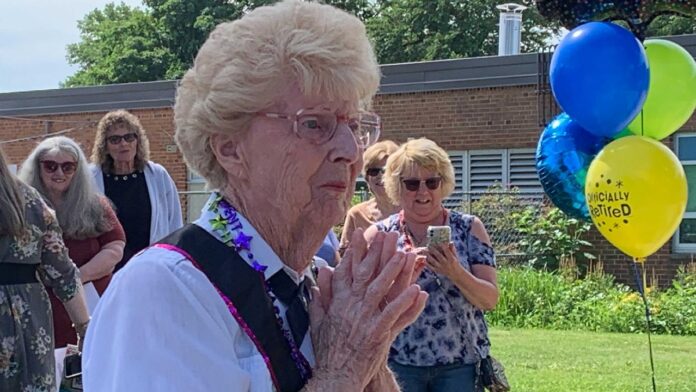 A crossing guard in New Jersey is hanging up her uniform after dedicating 57 years of service.

Claire Bauman, 94, retired from her crossing guard role at the Horace Mann Elementary School in Cherry Hill, according to FOX 29 Philadelphia.

On Thursday, June 16, members of the community gathered to celebrate Bauman’s commitment to ensuring children cross the street on school grounds.

Bauman told FOX 29 that her first day on the job was on Nov. 29, 1965. She had no idea that she’d be working in the field for nearly six decades.

Claire Bauman, a crossing guard at Horace Mann Elementary School in Cherry Hill, N.J., took on the role in November 1965. She’s now retiring at the age of 94.
(FOX 29 Philadelphia)

“The kids got me through a lot of things in my life,” Bauman told the local news outlet.

She added, “If it wasn’t for them, I don’t think I would have been able to.”

“We [applaud] Ms. Bauman and wish her a wonderful retirement,” Cherry Hills Schools wrote in a tweet.

Dr. John J. Cafagna, principal of Horace Mann Elementary School, told FOX 29 that Bauman has been a source of joy for Cherry Hill.

“We love her for caring for our kids, giving service to our community and showing up every day,” Cafagna said.

Cafagna thanked Bauman publicly for being a figure who took time to get to know the students of Horace Mann.

“You are unique. You are special,” he said during a speech. “You will forever be ingrained in our lives at Cherry Hill.”

The Cherry Hill Police Department also honored Bauman with a colorful bouquet and a framed proclamation that detailed her service.

“We would like to congratulate Crossing Guard Ms. Claire Bauman on her retirement after 57 years of service,” the department wrote on Thursday, June 16. “Ms. Bauman was hired as a Crossing Guard with the CHPD in 1965, and has been providing safe passage to three generations of Horace Mann students since.”

Bauman officially retired on Tuesday, June 21, according to FOX 29.

She told the news outlet, “I’ll be back.”