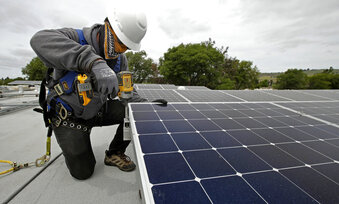 California air regulators are likely to hear a barrage of criticism Thursday on a plan to slash fossil fuel use and reach carbon neutrality by 2045, a proposal that would require a sweeping shift in how the state powers its massive economy in the face of climate change.

It will be the California Air Resources Board’s first public discussion of this year’s draft scoping plan, which is updated every five years and lays out a roadmap for the state to reach its climate goals. The 2045 goal is among the most ambitious in the nation, but the proposal has many critics beyond the oil industry, which says the strategy has too many bans and mandates. A wide range of environmental advocates say the plan does far too little to quickly lower planet-warming emissions.

“California can do better than this,” Assemblyman Al Muratsuchi, a Democrat, wrote in a letter about the proposal he is circulating for colleagues to sign.

California’s goal of reaching carbon neutrality by 2045 will require 30 times as many electric vehicles on the road compared to today.
(AP)

Reaching carbon neutrality means the state would remove as much carbon from the air as it emits. That would happen by a combination of lowering fossil fuel use and using technology to remove any remaining emissions from the air. Board staff estimates it would reduce petroleum demand across the economy and the use of fossil natural gas in buildings by 91% by 2045.

Doing so would require 30 times as many electric vehicles on the road compared to today, six times more electric appliances in homes, four times more wind and solar generation and 60 times more hydrogen.

Even with such a sweeping transition, the plan estimates California will still emit at least 94 million metric tons of carbon dioxide — about 22% of state emissions today — by 2045. All of that would also need to be removed from the air.

The criticisms from environmental groups center on key themes: The plan doesn’t call for deep enough emissions cuts, relies too heavily on unproven and energy intensive carbon removal technology, and lacks a focus on whether the state is poised to hit its more urgent 2030 emissions targets.

The air board created an Environmental Justice Advisory Committee, but many members of that committee said the plan falls far short.

Catherine Garoupa White, a member of the committee and executive director of the Central Valley Air Quality Coalition, said air regulators can’t answer key questions about the safety and feasibility of carbon sequestration and removal proposals. The plan allows oil refining to continue but requires installation of carbon capture technology.

“We’re constantly put in the position of having to react and respond to plans that they’ve already baked up with industry,” she said.

Liane Randolph, chair of the Air Resources Board, rejected criticism that the plan relies too much on carbon removal. She noted it calls for a major reduction in gas-fueled home appliances and a shift to electric-powered vehicles. Still, the demand for fossil fuels won’t drop to zero, she said.

“There seems to be a sense that we somehow favor mechanical carbon removal and we’re leaving strategies on the table in an effort to like, make space for that, and that’s just not the case,” she said.

The oil industry, for its part, has said the plan imposes too many bans and mandates that are unworkable and will raise prices. Western States Petroleum Association President Catherine Reheis-Boyd wrote in a Wednesday letter to Assembly Speaker Anthony Rendon that the state’s energy policies broadly, including those in the scoping plan, are contributing to higher fuel costs.

“Technology bans, mandates, and limiting affordable options for Californians is not leadership,” she wrote.

Howard Herzog, a senior research engineer in the Massachusetts Institute of Technology’s Energy Initiative, said the level of carbon removal the air board’s plan will require significantly more clean energy. To meet the plan’s goals, the state will need to massively ramp up solar, wind and battery storage.

“One of the biggest constraints will be finding enough carbon-free energy to scale up to that level,” Herzog said.

Right now, carbon capture is not in widespread use, though the Biden administration is spending billions to ramp it up.

Other critics have said the plan focuses too much on the 2045 goals at the expense of nearer 2030 targets. The air board maintains it’s on a path to lower emissions levels 40% below 1990 levels by that year. But meeting that would require a significant ramp up in the pace of reductions. Randolph, the air board chair, said a number of the state’s climate policies have or are set to become stricter.

With California’s goal of being carbon-neutral by 2045, more solar panels will be needed across the state.
(AP)

The scoping plan for the first time analyzes the role that natural and working lands, like forests and farms, will play in raising or lowering emissions. The modeling the plan relies on assumed that such land would pull carbon out of the air. But the plan later found it will likely contribute emissions through 2045, mostly from wildfires or related forest management. The air board may call for even more on carbon dioxide removal to account for those extra emissions.

The air board has 14 members, most of whom are appointed by the governor. They represent local air districts, environmental justice communities, farming, and the transportation system. They will approve the final plan by the end of the year.