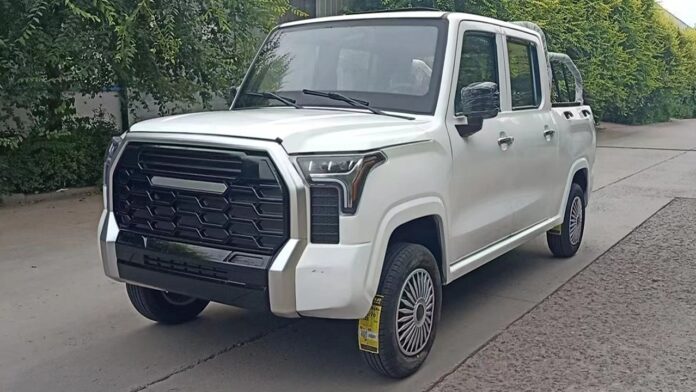 The subcompact four-door features a grille and headlight design that is nearly identical to the Toyota’s and even has the name Tundra embossed into its tailgate.

The company called it both the Tundar and Tundaa in Facebook posts, suggesting it was not an officially-licensed product.

TEST DRIVE: THE 2022 TOYOTA TUNDRA IS THE POWERFUL PRIUS OF PICKUPS

The vehicle is also powered by a 1.0-liter three-cylinder engine built by Isuzu, in which Toyota is a shareholder. But change is coming.

The Tundra has a distinctive design.
(Toyota)

Sino Vehicle Hub has reached out to Fox News Digital confirming that it is a work in progress and will soon be updated.

“We are testing the market response and will not sell in USA,” the company said in answer to a question asking if the design and naming was authorized by Toyota.

The pickup even says Tundra on the tailgate.
(SVH)

“Now it is just [a] prototype, will modify the grill design and brand name.”

The trucklet would not be able to meet U.S. safety standards, anyway, and would likely have to be offered as an off-road utility task vehicle (UTV). Power is sent to the rear wheels through a five-speed manual transmission, but it can reach a top speed of just 62 mph.

The truck has a 5-speed transmission.
(SVH)

Pricing is estimated at $6,000 before delivery, however, which would make it competitive with many UTVs.

Toyota has not responded to a request for comment on the situation.