HomeLifestyleCombat veteran and his wife help others fight PTSD — and find...
Lifestyle 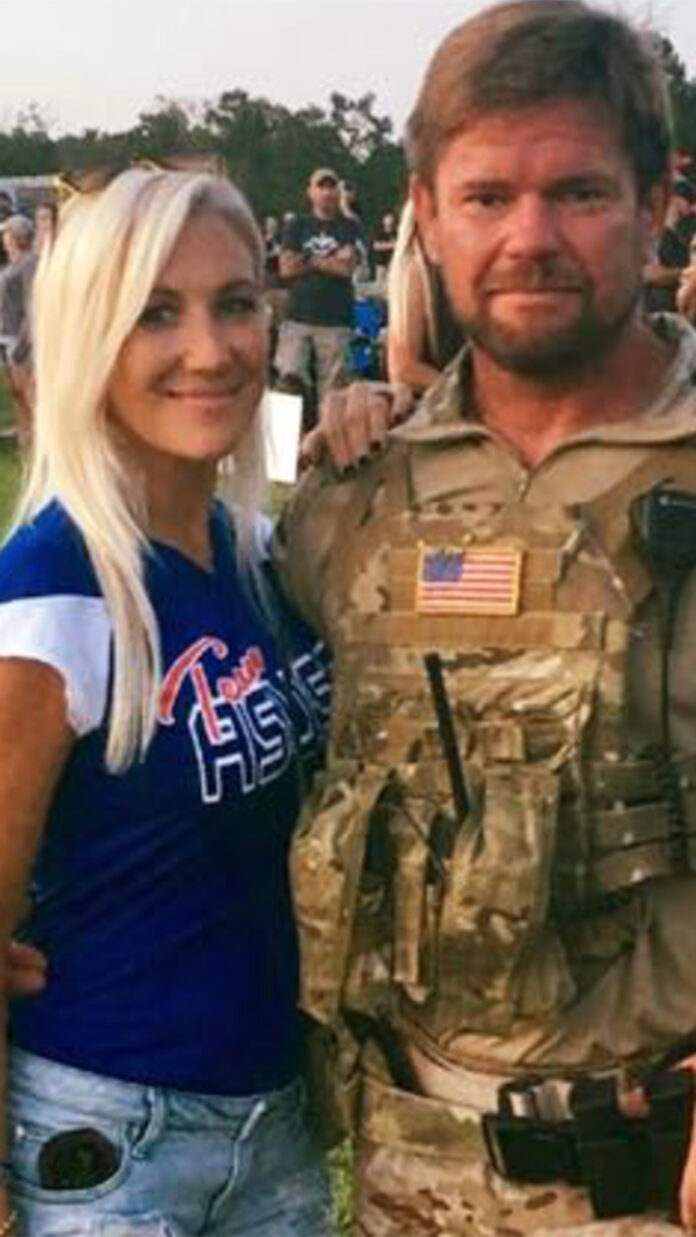 Fox Digital Originals spoke with Tom Satterly, a retired Command Sgt. Major who served in Delta Force. Tom fought in and led countless high-profile missions. He discusses his experience fighting in Somalia, which was portrayed in the movie “Black Hawk Down,” and how the fight changed his life.

Tom Satterly is a highly decorated combat veteran who was portrayed in the Oscar-winning 2001 film “Black Hawk Down,” about the 1993 battle in Somalia. But that is only the beginning of his dramatic and stunning story.

Satterly, who grew up in Indiana, served in the U.S. Army for 25 years — 20 of those in the most elite and secretive special operations unit.

He led hundreds of missions, and in turn, won many awards — including 5 Bronze Stars, 2 of them for valor.

Today, while he’s no longer on the physical battlefield, Tom Satterly is fighting a different but equally fierce and important fight: He is working to overcome the scourge of PTSD — and not just for himself.

AHEAD OF MEMORIAL DAY, BEST-SELLING NOVELIST JACK CARR REVEALS THE MILITARY INSPIRATION BEHIND HIS WORK

Satterly, a husband and a father, started a foundation to help scores of other American veterans all over the country who are suffering from a profound brain injury — just as he himself suffered from PTSD and is still in the process of addressing.

In a phone interview with Fox News Digital, Satterly described that horrible, bleak moment in August of 2013 when, “shaking, cold and covered in sweat,” he sat alone in a rental car in a parking lot — and took out a gun, intending to take his own life.

Tom Satterly during his time in Mogadishu. One of his buddies snapped this photo of him. “You’ll thank me for this one day,” the buddy told him.
(All Secure Foundation)

“‘My last act of selfishness. I figured no one cared anyway. If I felt bad about something, it was [for potentially] making a mess for the rental car company to have to clean up.”

“I glanced at the phone. The text message was from Jen.”

Satterly also wrote, “It was time to get it over with. But just then there was a buzzing on my cell phone letting me know I had a text message. I glanced at the phone. It was from Jen.”

Today, Jen Satterly is Tom’s wife and the co-founder of their nonprofit, the All Secure Foundation.

The Satterlys today “train Special Operation warriors across the country with a military company we helped found,” Tom Satterly said.
(All Secure Foundation)

“If there was anyone in my life at that time who could have pulled me back from the brink, it was Jen,” wrote Tom Satterly.

“I was drowning and while part of me wanted to let go and end the suffering, another part of me reached for the lifetime she tossed.”

Satterly believes his complex PTSD began back in Mogadishu, Somalia, when he unexpectedly became part of a rescue mission after two U.S. helicopters were shot down by rebels. “That ended up being the longest sustained firefight since the Vietnam War,” he told Fox News Digital.

A Black Hawk is shown here — similar to the two shot down in Mogadishu, Somalia, in 1993 by rebel forces. It was “a terrible situation” for U.S. forces.
(US Army-Cap. Adan Cezarez)

“That’s when you realize that this is real combat,” Tom Satterly said. “You can’t go home … They want you dead, right there. If you can imagine thousands of people who want you dead … It’s just the most horrifying thing you’ve ever been through.”

Today, through a gritty determination and an unwavering focus on moving forward together, Tom and Jen Satterly are tossing out lifelines to scores of other American vets and their spouses, children and other family members through All Secure Foundation (allsecurefoundation.org).

Tom and Jen Satterly are on a mission to help veterans and their families all over the country get healing and help for PTSD.
(All Secure Foundation)

Said Tom Satterly, “We try to tell the veterans now who are struggling, ‘The length of time you wait to get help is how long you’ll suffer.’ We’ve talked to people who fought at the Battle of the Bulge — they’ve suffered all this time. Their grandkids say, ‘He’s never talked about what he went through.'”

He added, “We want to break this stigma and get people the help they need, no matter what they’ve gone through.”

“The war comes home with people, whether they want it to or not.”

Jen Satterly told Fox News Digital, “We explain to people that PTSD is an injury — and the injury won’t heal on its own. It doesn’t go away on its own. Rather, the longer you wait to get help, the worse it gets with time.”

She added, “You might have an active-duty member who is already showing the signs and symptoms of PTS because it happens at the moment of the trauma, not after. It is a completely false narrative that, ‘Oh, I’ll get it when I get out’ or ‘It’ll hit me when I get out.’ No. It is tearing apart our active duty [military] today,” she emphasized.

“You might have an active-duty member who is already showing the signs and symptoms of PTS because it happens at the moment of the trauma.”

“Suicides have tripled in special operations every year since 2017,” she added. “The divorce rate is anywhere between 40% to 95%, depending on the unit and the rank and the amount of deployments.”

“The suicide rate in children who have a combat parent with PTS and also the suicide rate for spouses are much higher than in the civilian population.”

The Satterlys in a recent photo. They share with other veterans and their families that it’s “a sign of strength to get help for this … Working on your mental health is a way to improve it.”
(All Secure Foundation)

“So the war comes home with people,” she added, “whether they want it to or not. And not only are we dealing with soldiers who have complex PTS, but families who suffer” from it as well.

It is why the All Secure foundation is “passionate about serving the entirety of the problem.”

4 VETERANS ROWING 3,000 MILES ACROSS ATLANTIC TO HELP US SERVICE MEMBERS STRUGGLING WITH PTSD

Added Tom Satterly, “We’ve taken what was wrong with me, and the ways I tried to hide it in my life, medicate it and then lie about it — and then what Jen has learned about families, the way we fought through it together and the things we’ve studied since then — and share with veterans, ‘Hey, this is not a sign of weakness. This is a sign of strength, to get help for this.’”

He said that “working on your mental health is a way to improve it,” just as with anything people do — running, biking, swimming, whatever.

The Satterlys (top, far right) work regularly with active military and veterans across the nation and help them understand that PTSD is a brain injury that needs the same focus, time and attention as other injuries need.
(All Secure Foundation)

And as people work through their issues, reach out, grow stronger, understand they need to keep working at it, “we’re here to catch them,” said Tom Satterly.

The Satterlys run couples’ retreats — a total of four this year alone.

They also offer counseling daily and are guided and supported by therapists in their work.

In addition, they do coaching and motivational calls. “We also travel to different locations around the states, on posts and bases,” to speak directly with America’s service people and their families, said Tom Satterly.

“There’s help, there’s hope, there’s healing — and we are here to help people get to the other side.”

The couple want to help others push through and find solutions — and shatter some of the old beliefs such as, “Suck it up, you’ll be fine.”

“Think of all the preventative measures the military takes on so many other issues, with weapons, with vehicles, with all of the equipment,” said Tom Satterly. “The idea is to keep these things running better so they don’t break, and so they last longer.”

So, why, said Satterly, “don’t they teach people that about their mental health, their relationships and themselves?”

A young Tom Satterly (far left) is shown reenlisting with his team “in an undisclosed overseas location,” as he noted in his book, “All Secure.”
(All Secure Foundation)

The Satterlys are trying to shatter the old mentality, the guys who feel, “Hey, it’s OK — I’m not going to admit anything,” as well as help the newer ones who “have literally never left their units before,” said Jen Satterly.

The Satterlys met after Tom got out of the service; Jen was a photographer, filmmaker and advertiser. “I had no base of understanding, truly,” she said, about PTSD issues until she began working with those in special operations.

“The amount of confusion and frustration is intense — nobody really knows where to get the help, or who to call,” she said.

All Secure Foundation helps others “through programs and workshops, individual and couples coaching, and online courses.”

Members of the service, said Jen Satterly, “don’t want to go to behavioral health [services] because they don’t want it on their record, or they don’t want their peers to know about” what they’re feeling or suffering.

They need to heal, for real — and not wait until after they’re out of the service or retired. They need help, which is not a weakness.

Tom Satterly with a sea of American flags. “Our souls and our hearts, as well as our bodies, have blisters on them,” he wrote in his book. “We’re wounded and exhausted … But just keep moving forward, always forward.”
(All Secure Foundation)

This is where All Secure Foundation comes in.

As the 501c3 organization notes on its website, “All Secure Foundation retrains your brain from Post Traumatic Stress (PTS) to Post Traumatic Growth (PTG) through programs and workshops, individual and couples coaching, and online courses.”

“These are people who were trained for combat … Now they need to be trained to cope with it.”

They add, “You are never alone. We’ve got your six. Please reach out.”

Said Jen Satterly, “These are people who were trained for combat. Trained to get a job done. Now they need to be trained to cope with it — to come back home and live with their spouse and kids.”

“There’s help, there’s hope, there’s healing — and we are here to help people get to the other side,” she said.

To learn more about the Satterlys’ story, watch the original video at the top of this article. You can check out the website for All Secure Foundation at AllSecureFoundation.org.