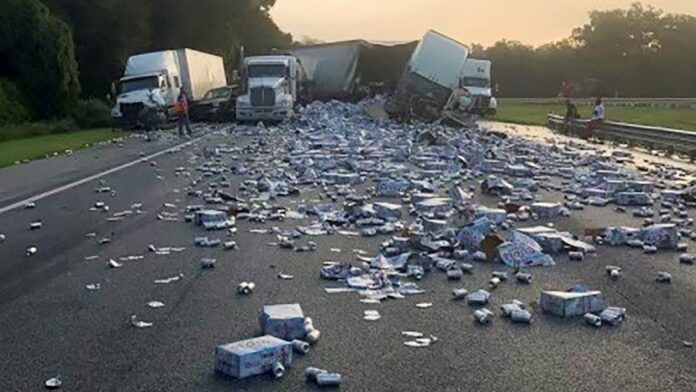 A semi-trailer driving through Florida crashed early Wednesday morning – closing down the highway and saturating it with Coors Light beer.

Authorities closed down a southbound portion of Interstate-75 to tend to the beer-drenched road.

Cases of Coors Light beer were strewn across a highway after two semitrailers collided on the Florida road.
(Florida Highway Patrol)

One semi-trailer clipped another while changing lanes – forcing other vehicles to brake suddenly.

MILLIONS OF BEES RELEASED AFTER SEMITRAILER CRASH ON INTERSTATE

When the freight truck carrying the Coors Light beers failed to stop, the vehicle collided with a pickup truck and another semi.

Hundreds of Silver Bullet beer cans were strewn across the road in the incident.

GEORGIA WOMAN, 91, SURVIVES AFTER SEMI-TRUCK TIRES CRASH INTO HER HOME: ‘I COULD’VE BEEN KILLED’

Authorities say that the occupants of the truck sustained minor injuries.
(Florida Highway Patrol via AP)

Authorities say that the occupants of the truck only sustained minor injuries. The roadway reopened at around 12 p.m. that day.

Associated Press contributed to this report.