HomeLifestyleCursive writing in American schools: Here's where this 'dying art' is still...
Lifestyle 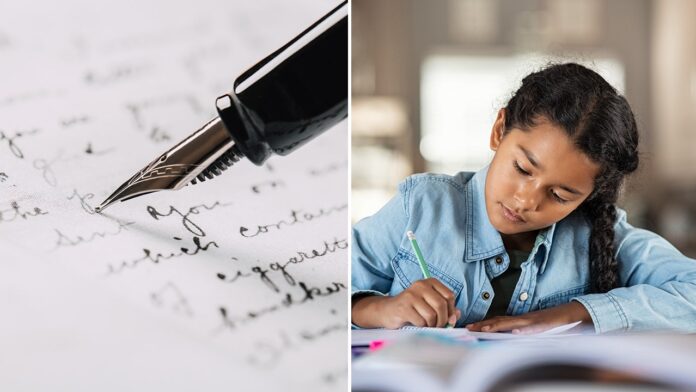 Cursive writing may have been replaced by emails, texting, DM’s and emojis, but not all educators are nixing handwriting lessons inside classrooms — and there are crucial reasons why.

The flowing penmanship has been taught in schools across America for more than a century, and some experts feel it is a skill that should remain.

Amanda Stedke, vice president of product development at Zaner-Bloser in Grandview Heights, Ohio, said cursive writing may be considered a “dying art” as many schools in the U.S. have removed it from curricula.

15 OF THE WILDEST, WACKIEST COLLEGE CLASSES TAUGHT IN AMERICA TODAY

“We are starting to see that standard be reintroduced,” Stedke told Fox News Digital.

She noted that educators in Ohio and Texas are once again teaching cursive handwriting in schools.

Copy of the Constitution for the United States of America, dated September 17, 1787.
(Fotosearch/Getty Images)

“Kids who are not learning cursive don’t have a signature,” she added. “They also can’t read it.”

Donna Whittaker, vice president of Curriculum and Education at Big Blue Marble Academy headquartered in Auburn, Alabama, said cursive writing was once used as “imperative communication” amid a war and for annual Christmas cards.

The Constitution of the United States, she pointed out, was also written in cursive.

“Now, we might use cursive writing to sign our name on a document or write a personalized message at the bottom of a greeting card. Most communication that we read is in print, so people tend to think, ‘Why teach cursive writing?'” Whittaker told Fox News Digital.

The winner of the National Handwriting Contest, hosted by Zaner-Bloser, will receive this medal.
(Zaner-Bloser)

For over 30 years, Zaner-Bloser has hosted the National Handwriting Contest for kids in grade K-8 at a school and state level. Millions of students participate in the hope of earning the title of Grand National Champion.

Children would also receive trophies, cash prizes and “the pride that comes with having the best penmanship in the nation,” according to Zaner-Bloser.

BOOK BANNING EFFORTS ARE ON A RECORD-HIGH TRAJECTORY FOR 2022: REPORT

Stedke said the competition is a great way to celebrate kids’ abilities, interests and successes outside of athletics.

“That’s why we kept it going for all these years,” she said.

Winners as young as 4 or 5 years old have been announced.

The contest kicks off Feb. 14, 2023 — and Stedke encourages schools across America to participate.

Those who enter must write the following nine-word sentence (a pangram, which contains every letter of the English-language alphabet) in cursive: “The quick brown fox jumps over the lazy dog.”

“Handwriting experts [and] judges [will] judge shape, size, spacing and the slant in the letters — they are the four keys to legibility,” Stedke said.

“I think it’s one of the earliest forms of how creativity can come out in these students.”

Stedke said Zaner-Bloser has seen contest winners go on to have interesting careers, including tattoo artistry and meteorology.

“It’s that expression. It impacts people in different ways,” she added. “I think it’s one of the earliest forms of how creativity can come out in these students.”

Cursive in America: What’s the history?

Platt Rogers Spencer, a teacher from East Fishkill, New York, is credited with developing a teachable system of cursive writing in the 1840s, according to the Smithsonian’s National Museum of American History (NMAH).

“The Spencerian method of penmanship was based on fluid movements observed in nature and was widely taught in schools beginning in 1850,” the museum wrote on a blog post published in February 2022.

Other styles of cursive existed in the U.S. and most originated in Europe.

For example, the body of the Declaration of Independence was written in round hand, which was developed in England and was designed to work with quill pens, according to the NMAH.

Replica of the Declaration of Independence — with a “focus on the word tip of an ink feather pen.”
(iStock)

Spencer’s cursive style reportedly “allowed for personalization and embellishment” and replaced “the tight, stiff English Copperplate script, also known as round hand, which was popular at the time,” the museum reported.

By the late 1800s, publisher and educator Austin Norman Palmer from Fort Jackson, N.Y., developed a new cursive style that was dubbed “The Palmer Method,” according to the NMAH.

Palmer reportedly developed the style for business writing — and “streamlined the flourishes” of Spencerian cursive with his new system.

Many business colleges and public schools adopted the Palmer Method, the museum wrote.

Penmanship met technological challenges in classrooms with the rise of typewriters in the 1930s and computers in the late 1980s, according to the NMAH.

Cursive’s decline: When did it happen?

Bruce Hanson, an education wellness expert and a test prep instructor at the University of California, Los Angeles, told Fox News Digital that cursive writing has fallen out of favor for a variety of reasons, though it is hard to date precisely when.

“Cursive instruction has been declining for years, long before 2010,” he said.

In 2010, the U.S. Department of Education introduced Common Core, a set of academic standards in English language arts, literacy and mathematics that students are expected to reach during the K-to-12 years.

“Several states adopted Common Core curriculum standards, which do not mention … handwriting as part of their standards for education,” Hanson said.

Why is cursive not as popular as it once was?

Cursive writing has declined in American public schools, given that educators are tasked with teaching skills that contribute to “an educated citizenry” who are capable of participating in “democratic society.”

That is according to Suzanne McLeod, coordinator of educational leadership at Binghamton University, a State University of New York.

“With the shift in the workplace to the use of typewriters and then word processors, the necessity of a workforce with excellent penmanship skills lessened immensely,” McLeod told Fox News Digital.

McLeod added that the U.S. education system shifted its focus to “high academic achievement” without lengthening the school days.

“The many hours of time spent focusing on penmanship drills and practice gave way to more time on mathematics, science, literacy and the introduction of keyboarding skills,” she said.

Still, some experts argue that the elimination of the art of cursive writing has been a loss for many students.

“Cursive writing is a challenge for some children, but we also understand some children thrive on learning something new or mastering a skill that they consider to be hard,” said Whittaker.

“That being said, I think when we expect less from children, then we get less from them — but when we challenge children, sometimes we get more than we ever imagined.”

Which schools still teach cursive writing, and why is it important?

Twenty-one states have cursive writing mandates in their curriculum.

In addition, many independent and parochial schools still teach the skill, according to Melissa Holman-Kursky, founder and director of CognitionSF, a San Francisco-based educational therapy service.

“While it’s not as necessary as it was when people were handwriting things like correspondence — or even manuscripts — it still has great benefits,” Holman-Kursky told Fox News Digital.

“Cursive improves fine motor control, is known to have a positive impact on memory and is often an easier way of writing for children who struggle with printing,” she said. “The hand doesn’t have to stop and start as much when writing in script.”

Is cursive writing a dying form of art? Experts say it’s much more than that.
(iStock)

Whittaker noted that kids are now learning to use print writing and a keyboard for written communication, in lieu of cursive.

“Keyboards and touch screens require little or no finger and wrist strength,” Whittaker said. “Children use keyboards and swipe to produce letters versus handwriting” — which she said can result in “weak wrists and finger muscles.”

“Being able to know that a printed letter A and a cursive letter A represent the same sound and meaning but can be written in two different manners requires high-level cognitive thinking,” she added.

Whittaker said that although schools today may not have cursive writing as part of their curricula, she feels it is important for parents to teach their children to sign their names in cursive.

“As we move toward a paperless society, the power that a signature holds is vital for children to understand,” she said.

“After all, the Declaration of Independence had signatures, written in cursive, at the bottom — and President Biden signs executive orders in the Oval Office.”