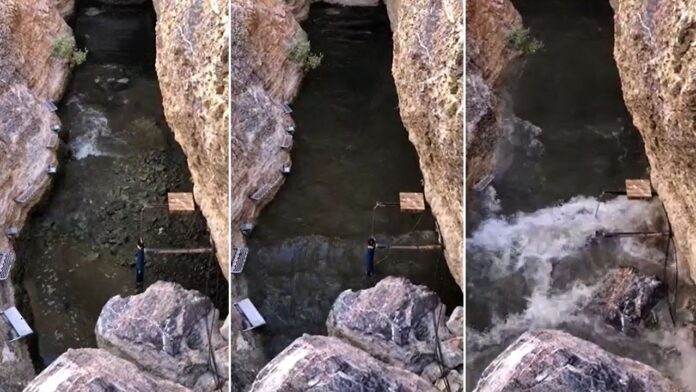 A 7.6 magnitude earthquake that rattled Mexico on Monday sent shockwaves that triggered a “desert tsunami” in a cave system 1,500 miles away in Death Valley National Park in Nevada, officials said.

Devils Hole is a partially water-filled limestone cave in Nye County, Nevada, and is hundreds of feet deep, according to the NPS.

It is home to the endangered Devils Hole pupfish, which depend on algae that grow on a shallow, sunlit shelf as a food source.

Officials described the “surprising quirk of geology” as a “desert tsunami,” but said it is properly known as a “seiche.” A seiche is a standing wave in an enclosed body of water.

The waves stirred the rocks and sediment on the shallow shelf and removed most of the algae growth, limiting the amount of food available to the pupfish in the short term, the NPS said.

“The pupfish have survived several of these events in recent years,” said Kevin Wilson, National Park Service aquatic ecologist. “We didn’t find any dead fish after the waves stopped.”

Officials said the Devils Hole pupfish population has been steadily growing, with 175 fish living in Devils Hole in March, compared to just 35 nine years ago.

On Thursday morning, a second earthquake measuring at a magnitude 6.8 struck western Mexico, killing at least two people. It was not immediately clear whether Devils Hole experienced the same phenomenon.