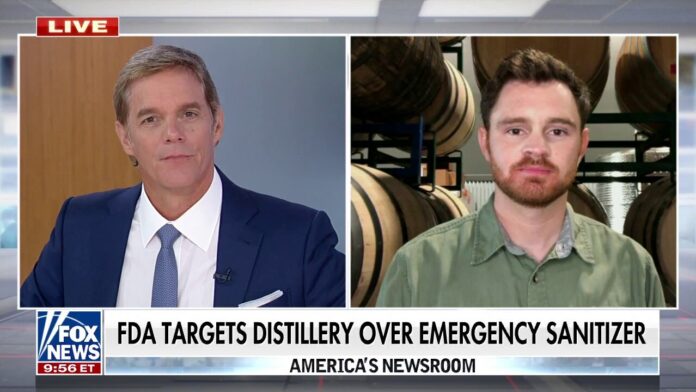 A California distiller is facing FDA backlash for the second time over sanitizer it made during the onset of the COVID-19 pandemic, despite not producing the product for more than two years.

Calwise Spirits Co. founder Aaron Bergh joined “America’s Newsroom” Monday to discuss how he has been targeted alongside other distillers across the country.

“I just continue to get slapped in the face for it,” Bergh told co-host Bill Hemmer. “Back in December 2020, the FDA came through, and they audited my business, as well as dozens of other distilleries throughout the country, and they tried to slap every single distillery throughout the country, regardless of whether we gave it away or made only five gallons of it, with a $14,000 flat fee for making it.”

Then-President Trump’s Department of Health and Human Services said it would not enforce the surprise fee weeks before President Biden took office.

SOME IMPURITIES ALLOWED IN HAND SANITIZERS TO EASE SUPPLY SHORTAGE

Schoolgirl with face mask using hands sanitizer while sitting at a desk in the classroom.
(iStock)

“We thought that would be the end of it, but here we are two years later and the FDA is going back to audit distillers again, even though we have not produced hand sanitizer for over two years and have none left in stock,” Bergh continued.

The agency claims an ingredient used to make the sanitizer, acetaldehyde, is a contaminant despite the fact wine and fruit juice have levels of the same chemical compound in much higher numbers.

The FDA targeted distilleries nationwide in 2020 with audits and fines, but issued an apology last year, touting the many companies that answered the call to keep communities safe.

“Small businesses who stepped up to fight COVID-19 should be applauded by their government, not taxed for doing so,” the statement read.

Despite issuing the apology, the FDA has reversed course again, renewing its hunt to take aim at the distillers.

“I think it begins with public awareness, which is why I’m coming on Fox News this morning and talking to other press,” Bergh said. “Congress is passing a bill to create 87,000 IRS agents, and this is just a foreshadowing of what’s going to come to America if people don’t wake up and realize what our government is doing.”

Bergh said he does not regret answering the call to serve his community despite the challenges he has faced in recent years.

“I don’t regret it. I would not do anything differently because I needed to heed the call to help my community,” he said. “I would do it again, but it does make me think twice.”

Bailee Hill is an associate editor with Fox News Digital.