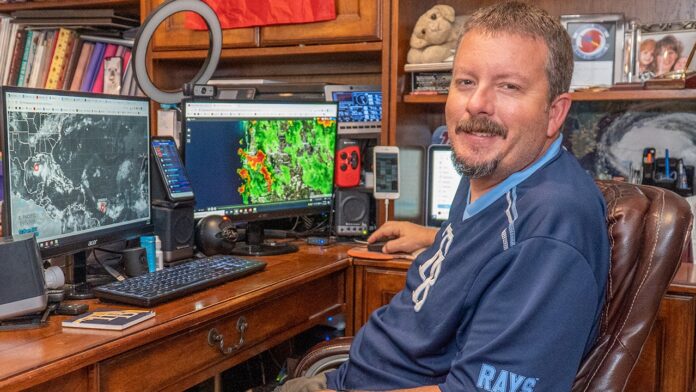 As the nation witnessed Hurricane Ian make landfall in Florida, weather hobbyists and concerned citizens have been turning toward a civilian-run weather blog for live updates.

Hurricane Ian made landfall near Cayo Costa, Florida, on Wednesday afternoon as a Category 4 storm. Ian had maximum sustained winds of 150 mph as slammed Southwest Florida. Ian has now downgraded to a tropical storm and “continues to bring life-threatening flooding, storm surge and high winds” to areas of Florida before it moves toward Georgia and the Carolinas, according to FOX Weather.

Mike Boylan, 48, the founder and media personality behind Mike’s Weather Page, began sharing hurricane tracking data and news to his Spaghetti Models blog in 2004, and his dedicated posts have attracted millions of people from around the world. His latest storm coverage has been focused on Ian.

“Some of the estimated rains so far from Ian across the state,” Boylan tweeted Thursday morning along with a graphic showing Ian moving over Florida. “Historic record breaking and just unbelievable. I saw it firsthand. Its bad. Add in the surge its even worse. spaghettimodels.com.”

“It looks like a pile of noodles. That’s how spaghetti models got their name,” Boylan told Fox News Digital. “Every one of those models is a different computer and each one has a different thought process of where the storms might go and do.”

Boylan shares spaghetti models and various other weather charts, maps and satellite imagery from the National Weather Service and National Hurricane Center to his website and social media accounts, and he tries to help people decipher complicated forecasts.

As a longtime Florida resident who was born in Bradenton, grew up in Pinellas County and now lives in Oldsmar – a city near the northern part of Tampa Bay – Boylan has lived through his fair share of hurricanes.

He said his interest in weather tracking formed naturally due to the number of storms that hit Florida.

Boylan started his weather blog at a time when hurricane data wasn’t easily accessible, he said.

“I was frustrated, so I made Mike’s Weather Page, and I really only shared it with friends and family,” Boylan said.

“I just wanted it to be a one-stop-shop for me because I got tired of looking for stuff on the internet,” he continued. “Here we are 18 years later, and it still has the same theme. It’s that one spot people go to when they want to see the weather.”

HURRICANE IAN EVACUATION: WHAT TO PACK

Boylan noted that he’s not a meteorologist, and he leaves weather predictions to industry professionals.

Anything he’s learned about weather has been self-taught through years of research, he noted.

“I think that’s what people relate to me,” Boylan said. “I’m not that science kind of guy.”

Boylan continued, “It kind of frustrates a lot of people because I do have a lot of followers. I make clear that I’m just an average Joe. [But] I’m in a weird spot because I’m allowed to drink a beer if I want to. I can say things a real meteorologist can’t. I’ve always added that personal side.”

TROPICAL STORM AND HURRICANE SAFETY CONSIDERATIONS EVERYONE SHOULD KNOW

Blogger, influencer, content creator, weather watcher and storm chaser are titles that describe the work Boylan does on social media.

Boylan told Fox News Digital that he thinks professional meteorologists have a “tough job because if you cry wolf too many times,” people start to doubt that they can be impacted by severe weather.

“Where I live near Tampa, we’ve had so many close calls,” Boylan said. “There were people who were convinced that we’ll never have a hurricane.”

Even though Mike Boylan is not a professional meteorologist, he won a Tropical Meteorology Award at the 2021 Governor’s Hurricane Conference in New York. He might be the first civilian to win this award.
(Mike Boylan of Mike’s Weather Page)

Hurricane Ian has been an “incredibly frustrating” storm to track because its projected path changed multiple times, according to Boylan.

“One time we had the storm going to the panhandle, and one model had it almost going to Miami,” Boylan said. “There’s so much science left to be learned. Weather, still even 2022, isn’t easy to predict.”

HURRICANE IDA POWER OUTAGES AND FOOD SAFETY: HOW MANY HOURS UNTIL REFRIGERATED FOOD IS UNSAFE

Boylan said he’s done his best to keep people up to date on Hurricane Ian by hosting daily social media livestreams and posting evacuation and safety resources from meteorologists, universities and government agencies.

Topics that have trended during Hurricane Ian include evacuating with pets and children and how to board up a home, Boylan said.

Boylan’s family evacuated to Orlando while he stayed home to cover the major hurricane.

“I had them evacuate. I was worried about power losses. My mom is on oxygen, and we have a daughter with Down Syndrome,” Boylan said. “I’m a little worried about the girls. It’s kind of traumatic. [But,] I feel better knowing they’re safe.”

Mike Boylan helped his family evacuate Hurricane Ian while he stayed behind to cover the storm in Florida.
(Mike Boylan of Mike’s Weather Page)

Boylan explained that connecting with his social media followers throughout the hurricane has made the experience feel less lonely.

He said his followers appreciate that he stays behind to cover Florida storms because they get to see what hurricane-hit areas look like when he livestreams and sends out his drone to capture footage.

Boylan said storms like Hurricane Ian typically cause coastal and inland damages, including flooding from heavy rain and oversaturated ground.

Tropical storm warnings have been issued throughout the state of Florida and some counties are under tornado and hurricane watch, according to Boylan.

Hurricanes can take cities years to fully recover from, especially in inland areas where hurricane aftermath is underreported when compared to areas on the Atlantic coast, Boylan told Fox News Digital.

“People forget that there are people affected,” Boylan said. “There’s a once-in-a-lifetime storm for somebody.”

Compared to other natural disasters, like earthquakes, tsunamis and tornadoes, hurricanes tend to have more survivors because residents have time to prepare, Boylan said.

Nearly nine in 10 (88%) of hurricane- or tropical storm-related deaths are caused by floods and storm surges, according to data from the National Hurricane Center, which analyzed reported U.S. fatalities from 1963 to 2012.

“With hurricanes, there’s plenty of time to prepare. It shouldn’t be that stressful,” Boylan said. “As soon as you say away from the water, you’re less likely to die.”

During hurricanes, many families rush to check into hotels, and latecomers who decide to do the same thing end up not being able to find vacancies, Boylan said.

This becomes a larger issue for families who need to drive farther distances and have trouble finding gas, he explained.

“What happened during the last hurricane, people were running out of gas on the highways because gas stations on the highways were out of gas,” Boylan recalled. “People also buy a generator, but then they don’t even think about buying the gas.”

Boylan told Fox News Digital that people in hurricane zones should build a hurricane preparedness kit sooner rather than later, which can include photos, documents, cash and change, can openers, tools, hardware and other essential items.

He said residents should also learn their hurricane evacuation zone and form a plan that details where each family member (and pet, if applicable) will go if evacuation is mandatory.

Mike Boylan and his family own two dogs. Pet-friendly evacuation shelters and hotel are hard to find during a hurricane, he told Fox News Digital.
(Mike Boylan of Mike’s Weather Page)

If sheltering at home with a backup generator, Boylan said families should thoroughly review generator instructions and precautions in order to prevent accidental carbon monoxide poisoning, which can have fatal consequences.

Boylan also warns people to be wary about what they see on social media and to look for reliable hurricane sources because some users will share worst-case scenario models in order to generate clicks over accuracy.

At the same time, Boylan said he thinks hurricanes unite people online and in person.

Mike Boylan has become a local celebrity in Florida for his civilian weather tracking.
(Mike Boylan of Mike’s Weather Page)

Some of his followers have even offered their homes as an evacuation zone during hurricanes, and he’s seen communities rally together to prepare for storms, he said.

“Communities are just bonded by this experience,” Boylan said. “This is twice now we boarded up at this house and you see neighbors helping neighbors and kids are out there cutting wood instead of being on their phones.”

“Every storm has a story where the town had to come together. That’s one kind of neat thing that I’ve seen traveling now,” Boylan said. “These are stories to share. [Hurricanes can be] a big part of people’s lives and it’s kind of cool to name them because that’s how you relate. Like, ‘Oh, do you remember Charlie?’ It’s a moment in your life. It’s a memory.”