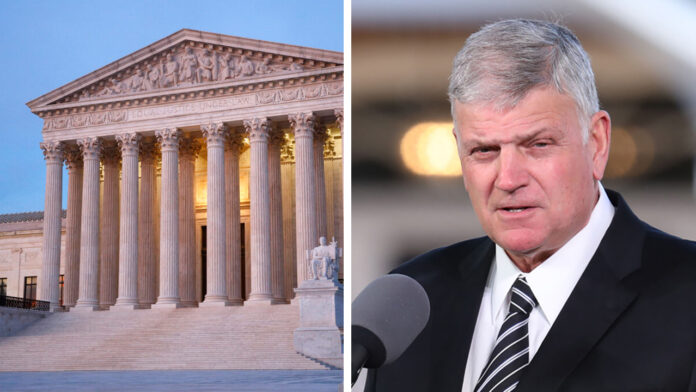 The Supreme Court of the United States handed down a ruling on Friday, June 24, 2022, to overturn Roe v. Wade and the subsequent case, Planned Parenthood v. Casey.

The Friday abortion ruling gives states the power to set their own abortion laws. The Roe ruling had, for nearly half a century, permitted abortions in the first two trimesters of pregnancy.

Strong faith-based reaction is coming in from a variety of individuals and corners.

Speaking first to Fox News Digital about his reaction, Christian evangelist Rev. Franklin Graham, the CEO and president of Samaritan’s Purse as well as the CEO and president of the Billy Graham Evangelistic Association, said on Friday morning, “The United States Supreme Court just announced one of the most significant rulings in my lifetime — officially voting to overturn the 1973 Roe v. Wade decision because it was ‘egregiously wrong from the start,’ as stated by Justice Samuel Alito.”

Rev. Graham added, “The radical left is calling for a ‘night of rage,’ pregnancy centers are already being vandalized and attacked, and our U.S. Supreme Court justices are being targeted with threats and intimidation.”

He also said, “Roe v. Wade, passed 49 years ago, has resulted in the deaths of over 63 million innocent children in this country. Sadly, this decision is not an end to abortion — it pushes the battle back to the states.”

“The United States Supreme Court just announced one of the most significant rulings in my lifetime.”

“My prayer is that every state will enact protections for children in the womb,” added Graham, “and that our nation will value life and recognize the rights of our most vulnerable.”

FRANKLIN GRAHAM REACHED OVER 68,000 CHRISTIANS AND OTHERS IN BRAZIL RECENTLY

In addition, Pastor Jentezen Franklin, who is based in Georgia, shared this statement on Friday morning with Fox News Digital: “This is a remarkable answer to the prayers of millions of people for decades. I honestly never dreamed in my lifetime I would see this happen. We do not gloat or dare say anything but praise to our God for this courageous and just decision by the Supreme Court.”

Jentezen Franklin is pastor of Free Chapel in Gainesville, Georgia. He shared thoughts on the June 24 abortion ruling with Fox News Digital on Friday.
(Courtesy of Rogers and Cowan PMK)

He added, “Now we must support, love and demonstrate Gods grace and goodness to would-be mothers and the precious children this decision has rescued.”

“While as Christians we weep for the precious lives that were lost the past nearly 50 years under Roe,” he added, “we rejoice alongside every witness in heaven over the victory that transpired today for the unborn.”

Pastor Lucas Miles of Indiana shared his reaction with Fox News Digital to the new SCOTUS ruling, out on June 24, 2022.
(Krissy Miles)

“Thank God that our nation’s justices were able to stand strong despite tremendous pressure and threats of personal peril as they overturned the evil that was Roe,” he also said.

AS SCOTUS RULING ON ABORTION NEARS, FAITH LEADERS STAND UP FOR LIFE

“Though there is still more work ahead to continue the fight, we pause to recognize the magnitude of this decision — and give all glory to God for this victory.”

Miles also said, “We also pray for those grieved by this news, that God would open their eyes to the wickedness of abortion and that a spirit of repentance would fall upon the people of this nation for applauding the horrors committed during the reign of Roe v Wade.”

“We pause to recognize the magnitude of this decision — and give all glory to God for this victory.”

Bethany and Ryan Bomberger, co-founders of The Radiance Foundation, based just outside of Washington, D.C., shared this statement with Fox News Digital: “As a former single mother who faced an unplanned pregnancy — and as a father who was conceived in rape but adopted in love — we rejoice today that a supremely wrong decision has been aborted.”

The statement continued, “Roe v. Wade, under the guise of equality, violently stripped it away from the most defenseless among us, killing over 64 million since 1973. Roe never empowered women. It empowered abortionists who profited from fear and exploitation.”

The Bombergers added, “We look forward to the cultural erasure of Planned Parenthood, a corrupt $2 billion taxpayer-funded abortion business that preys on the vulnerable. The pro-life movement will continue to do what we’ve been doing for decades — loving those facing unplanned pregnancies and providing for them medically, materially, emotionally, and spiritually.”

“The battle for life will continue in the states until every member of the human family is treated equally.”

They also said, “The battle for life will continue in the states until every member of the human family is treated equally.”

Debbie Wuthnow of iVoterGuide, based in Austin, Texas, told Fox News Digital, “After almost 50 years of prayer and advocacy, we rejoice in the Dobbs decision and that Roe v. Wade is no longer the law of the land.”

Pro-life activists try to block the sign of a pro-choice activist during the March for Life on Jan. 19, 2018 in Washington.
(Alex Wong/Getty Images)

“However, the war to save the unborn is not over,” added Wuthnow.

“However, the war to save the unborn is not over.”

Jonathan Cahn, a rabbi and New York Times best-selling author, told Fox News Digital as well, “Now that the Supreme Court followed through and overturned Roe v. Wade, it is the first but major step in turning back that which history will judge as a great evil. In the Bible, the 50th year is the Jubilee — the year of restitution, when that which taken is restored, and that which was done is reversed.”

Jason Yates, CEO of My Faith Votes, based in Plano, Texas, shared this statement in response to the Dobbs decision by SCOTUS: “Today, it is abundantly clear that elections have consequences.”

“When people unite and stand for what is right, we have real influence on the world around us.”

“For years,” he added, “we have been praying that the Lord’s kingdom come on earth, that the most vulnerable would be protected in our nation. The Supreme Court took a major step forward in that direction, proving that when people unite and stand for what is right, we have real influence on the world around us.”

He added, “Now, we must take this influence into the vital elections happening in each state. We celebrate this massive victory and continue fighting for life for all humankind.”

Maureen Mackey is managing editor of lifestyle for Fox News Digital. Story tips can be sent on Twitter at @maurmack.