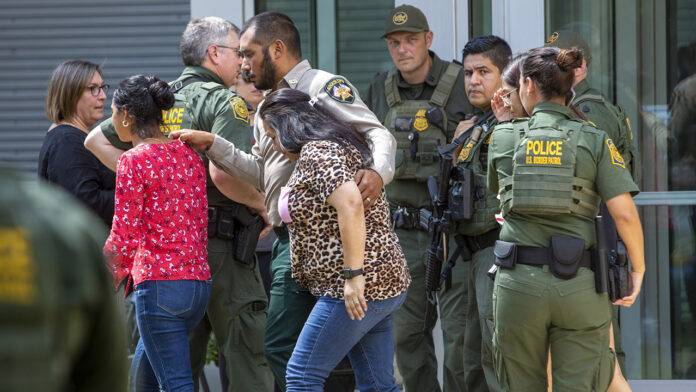 Some Uvalde, Texas, parents are frustrated with the way police responded to Tuesday’s mass shooting at Robb Elementary School that left 19 children and two teachers dead, according to reports.

“This is an ongoing investigation that is being led by the Texas Rangers. I understand questions are surfacing regarding the details of what occurred. I know answers will not come fast enough during this trying time, but rest assured that with completion of the full investigation, I will be able to answer all the questions that we can,” Rodriguez wrote.

Angeli Rose Gomez, a parent of two children in second and third grade at Robb Elementary, told The Wall Street Journal that Texas Rangers arrested her for intervening in an active situation after she and other parents urged police to enter the school building while the suspect was believed to be inside.

“The police were doing nothing,” she told the outlet. “They were just standing outside the fence. They weren’t going in there or running anywhere.”

Authorities have said the shooting suspect barricaded himself inside a fourth-grade classroom before fatally shooting 21 people. An agent with the Border Patrol Tactical Unit (BORTAC), is believed to have fatally shot the suspected gunman.

Videos posted on social media from the day of the shooting show frustrated parents and onlookers begging police to enter the building.

A policeman talks to people asking for information outside of the Robb Elementary School in Uvalde, Texas, on Tuesday, May 24.
(AP/Dario Lopez-Mills)

“Go in there! Go in there!” onlookers shouted at the officers soon after the attack began, said Juan Carranza, 24, who saw the scene from outside his house, across the street from Robb Elementary School in the close-knit town of Uvalde. Carranza said the officers did not go in.

Javier Cazares, whose fourth-grade daughter, Jacklyn Cazares, was killed in the attack, said he raced to the school when he heard about the shooting, arriving while police were still gathered outside the building.

Upset that police were not moving in, he raised the idea of charging into the school with several other bystanders.

“They were unprepared,” he said of first-responders.

A woman cries as she leaves the Uvalde Civic Center, Tuesday, May 24, 2022, in Uvalde, Texas.
(William Luther/The San Antonio Express-News via AP)

Minutes earlier, Carranza had watched as suspect Salvador Ramos crashed his truck into a ditch outside the school, grabbed his AR-15-style semi-automatic rifle and shot at two people outside a nearby funeral home who ran away uninjured.

There were also multiple conflicting reports regarding whether officers confronted Ramos at the school’s entrance. At first, law enforcement officials said Ramos “encountered” officers outside the school, though other reports suggested officers and suspects exchanged gunfire. Then, the Texas Department of Public Safety (TDPS) said Ramos shot at two Uvalde police officers as they arrived outside the school, behind Ramos. On Wednesday, TDPS South Texas Regional Director Victor Escalon said Ramos was “not confronted by anybody” and that no armed security guards were stationed at the school’s entrance when the suspected gunman entered.

“During, they were taking gunfire, negotiations, and developing a team to make entry to stop him,” Escalon said.

In addition to concerns about the police response to the shooting, Escalon’s Wednesday announcement that the door to Robb Elementary may have been unlocked on Tuesday sparked new concerns.