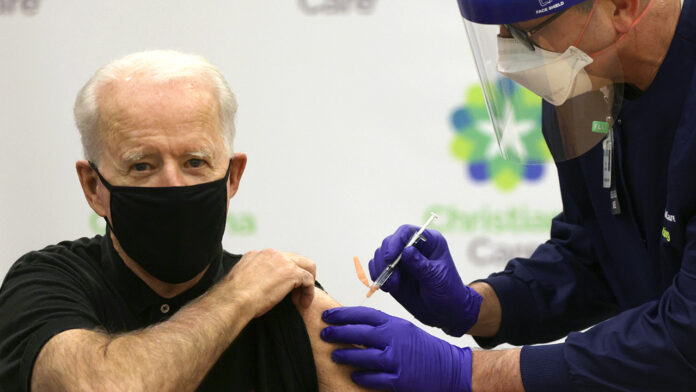 The Biden administration has claimed to fight misinformation at all costs, even establishing a “Disinformation Governance Board,” and Big Tech outfits like Twitter have flagged posts they claim contain misinformation on important issues like coronavirus vaccines.

Yet while the White House shared bogus info itself on Thursday about vaccines, Twitter has yet to note the inaccurate message to many users.

“When President Biden took office, millions were unemployed and there was no vaccine available. In the last 15 months, the economy has created 8.3M jobs and the unemployment rate stands at 3.6% — the fastest decline in unemployment to start a President’s term ever recorded,” the White House’s verified Twitter account wrote.

Observers were quick to point out the COVID-19 vaccine was, in fact, available when Biden took office on Jan. 20, 2021. The same Twitter account even shared a video of then-president-elect Biden getting his second dose a week before Inauguration Day.

WHITE HOUSE BURIED OVER TWEET CLAIMING THERE WAS ‘NO VACCINE’ WHEN BIDEN TOOK OFFICE: ‘DELETE THIS’

Biden has previously shared an image of himself receiving the first dose on Dec. 21, 2020.

The White House did not immediately respond to a request for comment.

Twitter, which has taken steps to prevent misinformation on the platform, claims in its guidelines that users “may not use Twitter’s services to share false or misleading information about COVID-19 which may lead to harm.”

The policy goes on to state that content related to COVID-19 is considered in violation if it’s “demonstrably false or misleading, based on widely available, authoritative sources.” The social media juggernaut then explains that these type of violations could force users to become locked out of their account until the tweet is deleted, and a permanent suspension could be handed to repeat offenders.

Some users received a disclaimer that “readers added context” to indicate the first vaccines were given before Biden took office, but only a “small group of people” who are part of a “pilot program” received the notification. It’s unclear why the White House tweet received this message that wasn’t even visible to most followers instead of harsher punishment.

Twitter did not immediately respond when asked for an explanation regarding the “added context” message being given to the tweet instead of something that indicates the information shared by the White House was false.

Many Americans have lost access to their account for spreading inaccurate information as deemed by Twitter, and satirical website The Babylon Bee was recently locked out of its account for a joke naming Biden administration official Dr. Rachel Levine the satire site’s “Man of the Year” for 2022. Levine, the U.S. Assistant Secretary of Health, is a transgender woman.

While Twitter didn’t take immediate action against the clear misinformation from the White House, critics from across the media landscape noticed the infraction.

Fox News’ Joe Concha tweeted, “Anybody got the customer service line for the new disinformation board?”

CNN’s Daniel Dale, who has been critical of Biden since the network’s recent leadership change, also called out the tweet.

“’There was no vaccine available’ is very clearly false. More than 3 million Americans were fully vaccinated and more than 18 million had at least one dose by Biden’s Inauguration Day. Biden himself was fully vaccinated,” Dale tweeted. “Obviously became more widely available with time, but.”

“Delete this false tweet. Biden himself has said 8% of seniors had gotten the vaccine on the day he took office,” Kessler wrote. “Biden was one of them.”