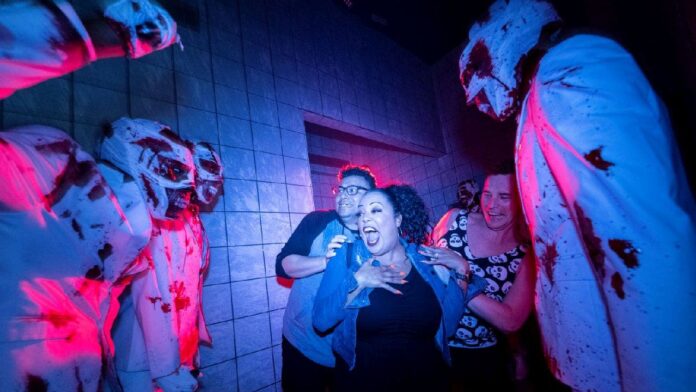 Universal Studios is celebrating Halloween Horror Nights at all four of its theme parks.

“I’m a tiny, tiny baby when it comes to this. I’m going to be screaming,” actress Kate Siegel told Fox News Digital during the event’s red carpet opening at Universal Studios Hollywood, which took place on Sept. 8.

“The last time I came was last year when they got the Hill House maze, and it took me three days to recover,” Siegel added.

Actress Lin Shaye, who was also in attendance, said she likes that Universal Studios puts together stories that truly scare their guests.

Jason Blum, founder and CEO of Blumhouse Productions, which has made hits like “Paranormal Activity” and “The Purge,” said he enjoys Universal’s Halloween Horror Nights because he’s always been a fan of haunted houses and horror experiences.

“That’s what I like about all of this,” Curtis told Fox News Digital. “They love Laurie Strode. And I’m Laurie Strode. So, what I get is this beautiful, reflective feeling of love and support.”

Some attractions visitors can expect at Universal Studios Orlando and Hollywood include The Horrors of Blumhouse, a terror tram that takes inspiration from Jordan Peele’s “Us” and “Nope,” and The Weeknd: After Hours Nightmare, a musical haunted house modeled after The Weeknd’s “After Hours” album.

Monster mazes, tours and other cinematic experiences can also be found.

Souvenirs from the Halloween Horror Nights 2022 include collectible cups, clothing, accessories and vinyl figures from Universal properties and other recognizable horror movie franchises.

Event details for each of Universal’s parks can be found on HalloweenHorrorNights.com. Costumes and masks are not allowed.

To check out a walk-through of the monster-filled mazes at Halloween Horror Nights in California, watch the video at the top of this article.