Why Phil Collins stop playing the drums? The musician’s heath concerns have led him to stop drumming 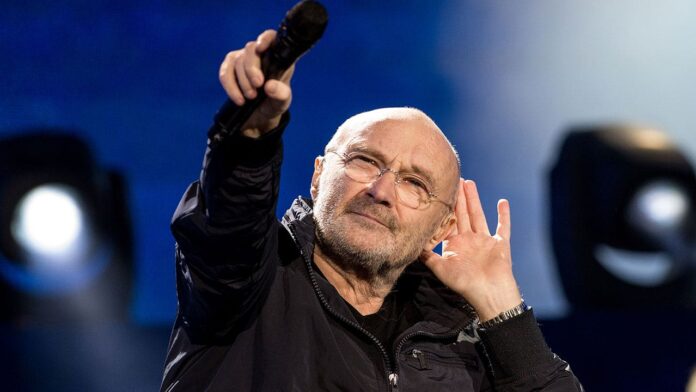 Phil Collins is a successful musician who is known for his impressive, energetic drumming. Unfortunately, due to health complications, Collins can no longer play the drums like he once could.

Collins has had more than one injury over the years that have affected his drum playing. In 2007, he endured a spine injury that left him with nerve damage.

“My vertebrae have been crushing my spinal cord because of the position I drum in,” Collins told Daily Mail in 2009.

“It comes from years of playing. I can’t even hold the sticks properly without it being painful, I even used to tape the sticks to my hands to get through,” he continued.

ARE LILY AND PHIL COLLINS RELATED? HOW ACTRESS WENT FROM DAUGHTER OF FAMOUS DRUMMER TO ‘EMILY IN PARIS’ STAR

He talked again about his health struggles during a 2021 interview on BBC Breakfast.

“I can barely hold a stick with his hand, so there are certain physical things, which get in the way,” he said.

Even though his heath struggles have prevented him from drumming, he has continued to sing at his concerts in recent years, instead being at the drums.

Why did Phil Collins leave Genesis?

Collins joined Genesis in 1970, when the band was led by singer Peter Gabriel. In 1975, Gabriel left the band, and Collins took over as the lead singer and face of the band.

Phil Collins was in Genesis until 1996, when he left to record solo material.
( Brian Rasic/WireImage)

LILY COLLINS WRITES TOUCHING TRIBUTE FOR DAD PHIL COLLINS ON HIS 71ST BIRTHDAY: ‘I WILL ALWAYS NEED YOU’

In 1996, Collins left the band to pursue a solo career, although he had had massive solo success in the 1980s. His first solo hit was the song “In the Air Tonight,” which is still one of his most famous songs to date.

During his solo career, he also wrote the song “You’ll Be in My Heart” for the Disney animated movie “Tarzan.” Collins won an Academy Award for the song.

In 2007, Collins went on tour with Genesis for the “Turn It On Again Tour,” and then during the bands most recent tour, “The Last Domino?” Collins’ son Nic played the drums for the band while his father covered the vocals.

During the last show of the 2022 tour, Collins announced that it would be the band’s last performance.

During the last show of Genesis’ 2022 tour, Collins announced to the crowd that it would be the bands last concert.
(David Wolff-Patrick/Redferns)

“Tonight is a very special night. Of course, we’re playing in London. It’s the last stop of our tour, and it’s the last show for Genesis,” he said during the show. “It’s difficult for us to believe that you still came out to see it. I guess after tonight we’ve all got to get real jobs.”

What are Phil Collins’ most popular songs?

Collins has released a lot of music over the years, both as a solo artist and as a member of Genesis. He has also won a number of awards for his music, including eight Grammy Awards, two Golden Globes and an Academy Award.

A lot of Collins’ most popular songs came out during the ’80s, but he released albums through 2010, when he put out “Going Back.” He released his first solo album, “Face Value,” in 1981.

Collins’ most popular song was his debut solo single, “In the Air Tonight,” which was released in January 1981. Even all these years later, it remains one of the musician’s most famous songs to date. Collins’ other material includes “Everyday,” “I Can’t Stop Loving You,” “Separate Lives,” “You Can’t Hurry Love,” “Something Happened on the Way to Heaven,” “Easy Lover,” “Against All Odds,” “A Groovy Kind of Love,” “One More Night,” “Sussudio,” “Two Hearts” and “Do You Remember?”

Phil Collins won an Academy Award for “You’ll Be In My Heart,” the song that he wrote for the 1999 animated movie “Tarzan.”
(Bob Riha Jr/WireImage)

Collins also contributed to the soundtrack of the 1999 animated Disney movie “Tarzan,” which included the songs “Two Worlds” and “You’ll Be In My Heart,” a song for which Collins went on to win an Academy Award.

“Tarzan” wasn’t the only animated movie Collins produced music for. He also worked on the soundtrack for the 2003 animated movie “Brother Bear,” which included the songs “Look Through My Eyes,” “No Way Out” and “On My Way.”

Ashlyn Messier is a writer for Fox News Digital.

Share
Facebook
Twitter
Pinterest
WhatsApp
Linkedin
ReddIt
Previous articleI won my religious freedom suit, now I want to get back to coaching and winning on the field
Next articleSteve Kerr: James Wiseman Has ‘A Lot of Confidence in His Knee’ | SLAM
RELATED ARTICLES
Lifestyle