HomeNewsAmerica‘Armed and dangerous’ Arizona man on the run after shooting wife ‘in...
NewsAmerica

‘Armed and dangerous’ Arizona man on the run after shooting wife ‘in cold blood’ in front of child: sheriff 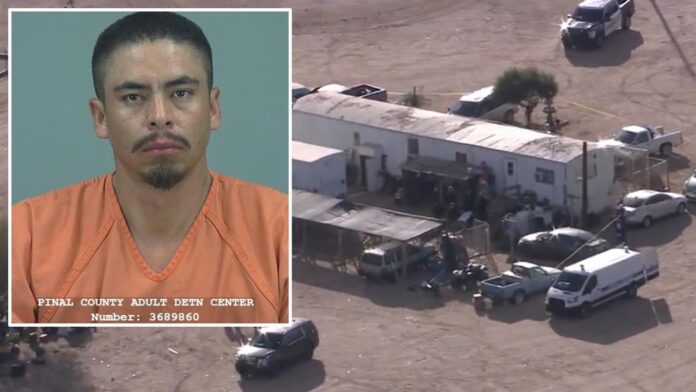 An Arizona man suspected of fatally shooting his wife in front of a child is on the run and should be considered armed and dangerous, authorities said Tuesday.

Ismael Ortega Hernandez, 32, fled out the back door of a home on Padilla Road near Stanfield around 9 p.m. Monday after shooting his wife, the Pinal County Sheriff’s Office said.

A child at the home called police, stating that a family member was dying and that the victim’s own husband had shot her, the sheriff’s office said.

“This turd shot his wife in cold blood right in front of a child,” Pinal County Sheriff Mark Lamb said in a video update. “We are absolutely looking for him.”

Ismael Ortega Hernandez, 32, is wanted in the fatal shooting of his wife at a home in Pinal County, Arizona, on Monday.
(Pinal County Sheriff’s Office)

Authorities deployed dogs and a helicopter to search for Hernandez. While the suspect has yet to be located, investigators found Hernandez’s cell phone in the area.

A child called police and said a family member was dying after her husband shot her, authorities said.
(FOX10 Phoenix KSAZ)

Hernandez was last seen wearing a black shirt and black pants. He is believed to be about five feet, six inches tall with a thin build.

Pinal County Sheriff Mark Lamb said Hernandez ran out of a back door and remains at large.
(FOX10 Phoenix KSAZ)

Authorities asked anyone with information about Hernandez’s whereabouts to call 911 or the Pinal County Sheriff’s Office.