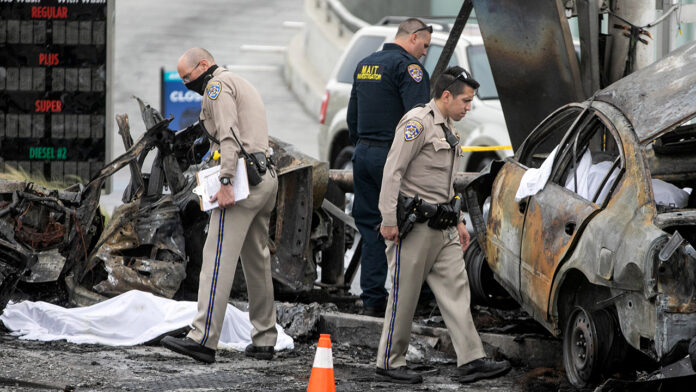 Charges are expected as soon as Monday for the traveling nurse from Texas accused of speeding through a Los Angeles intersection last week, causing a fiery crash that left six people dead, including a baby and an eight and half month pregnant woman who was on her way to prenatal checkup.

Nicole Lorraine Linton, a 37-year-old traveling nurse from Houston, Texas, was arrested on suspicion of vehicular homicide with gross negligence after allegedly driving a Mercedes at a speed of nearly 100 mph through a red light at an intersection in the Windsor Hills section of Los Angeles, causing a fiery crash Thursday.

Los Angeles County District Attorney George Gascón said Friday that his office would be working with law enforcement throughout the weekend and the investigation could be presented to his office for consideration of charges “as early as Monday,” FOX 11 Los Angeles reported.

VICTIM OF LA CRASH THAT KILLED 6 WAS HEADING TO PRE-NATAL CHECKUP: ‘REALLY BROKE OUR HEARTS’

CHP and other officials investigate a fiery crash where multiple people were killed near a Windsor Hills gas station at the intersection of West Slauson and South La Brea avenues on Aug. 4, 2022, in Los Angeles, California.
(Jason Armond / Los Angeles Times via Getty Images)

During her time in California, Linton reportedly had been working at Kaiser Permanente West Los Angeles Medical Center. The hospital released a brief statement in response to the crash, declining to comment at length amid the pending criminal investigation.

“Everyone at Kaiser Permanente is deeply saddened by Thursday’s horrific crash,” it said. “It’s impossible to imagine the pain those involved are experiencing. Our thoughts are with everyone affected by this tragedy. At this time, we are not able to comment on what has been reported as a criminal investigation.”

Members of the Los Angeles County Fire Department, CHP and other officials investigate a fiery crash where multiple people were killed near a Windsor Hills gas station at the intersection of West Slauson and South La Brea avenues on Aug. 4, 2022, in Los Angeles, California.
(Jason Armond / Los Angeles Times via Getty Images)

Those killed included 23-year-old Asherey Ryan, her son 11-month-old son, Alonzo Quintero, and her boyfriend, Reynold Lester. Ryan was eight and a half months pregnant and expecting another baby boy. The family said they were planning to name the unborn infant who also killed Armani Lester.

California Highway Patrol said up to eight vehicles were involved in the collision.

The coroner’s office identified another victim as 66-year-old Craig Pitchford, a possible pedestrian.