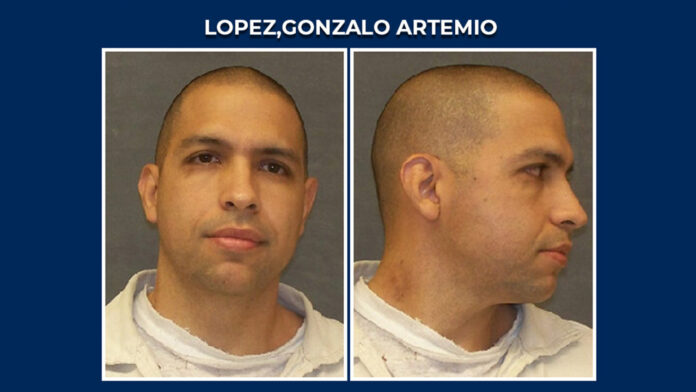 A Texas man convicted of murder escaped from a prison bus after stabbing a correction officer during transportation, officials said. Several law enforcement agencies are now engaged in an active manhunt for Gonzalo Lopez.

Gonzalo Artemio Lopez, 46, assaulted a correctional officer during a Thursday transport and then fled from the bus, which was carrying 16 inmates at the time, officials said. Lopez was serving a life sentence for capital murder and attempted murder.

ARRESTS MADE IN DALLAS CONCERT SHOOTING THAT LEFT 1 DEAD, 16 INJURED

The Hispanic man was wearing a white jail-issued uniform when he escaped, the Leon County Sheriff’s Office said. He escaped while the bus was in Leon County, which is located between Dallas and Houston.

The corrections officer who was driving the bus sustained non-life-threatening injuries, Jason Clark, chief of staff for the Texas Department of Criminal Justice, told the Associated Press.

As the search extended into a second day, local Centerville Independent School District suspended classes on Friday, and wrote on its Facebook page: “Leon County Sheriff Dept has asked everyone to shelter in place if you live west of I45. Everyone please stay safe and follow the directions of our Law Enforcement.

Lopez’s past convictions include capital murder, multiple aggravated assault charges, kidnappings and drug offense, dating back to 1995, according to the Texas Department of Criminal Justice.

State prison records show Lopez was being housed in the department’s Alfred Hughes facility, which is located over 100 miles from the search area.