HomeNewsAmericaFlorida serial killers charged in a pair of 1983 rape and murder...
NewsAmerica 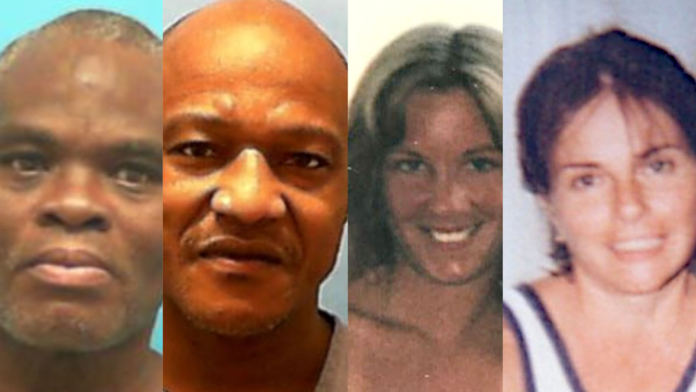 A pair of serial killers were indicted Thursday for the 1983 cold case rapes and murders of two women in Tampa, Florida — after an innocent man was exonerated, authorities announced.

Amos Robinson, 58, and Abron Scott, 57, who are serving life sentences for another murder, are now charged in the gruesome killings of Barbara Grams, 19, and Linda Lansen, 41.

“We now know these two men carried out a sinister spree of rape and murder in Tampa Bay in the summer and fall of 1983,” said Andrew Warren, whom Gov. Ron DeSantis suspended earlier Thursday as the state attorney for Hillsborough County.

Two years ago, Tampa’s Conviction Review Unit located DNA evidence from a rape kit that led to the exoneration of Robert DuBoise, who had wrongfully served 37 years in prison for the slaying of Grams.

A photo combination showing Abron Scott and Amos Robinson, who are accused of murdering and raping Barbara Grams (second to right) and Linda Lansen in 1983.
(Hillsborough County state attorney )

The only evidence placing him at the scene was a supposed bite mark on Grams’ face that an expert claimed matched his teeth.

Bite-mark analysis has since been broadly rejected in the scientific community as unreliable.

Officials submitted the DNA sample found on Grams’ body to a national database, and Robinson and Scott were matches. Investigators also tied the two men to the unsolved murder of Lansen through a DNA sample found in her rape kit.

Robinson and Scott are currently serving life sentences for kidnapping and beating Carlos Orellana — then running him over with his own car on Oct. 22, 1983. But their wave of human destruction began months earlier.

“In July, Linda Lansen was found at the end of Memorial Highway in Town and County. She had been raped, shot in the head and dumped in the bushes,” Warren said at a press conference. “In August, Barbara Grams was found behind a dental office in Tampa Heights. She had been beaten to death and raped.”

Robinson and another man were charged in 1991 for the beating death of Hermenia Castro on Sept. 5, 1983, in Tampa, but the case never went to trial.

Robert DuBoise was exonerated and released from prison Aug. 27, 2020, in Bowling Green, Florida, after serving 37 years for the rape and murder of Barbara Grams.
(Steve Nesius/ Associated Press)

Lansen was a freelance photographer from New York who had moved to Tampa as adult. Her niece, Linda Sheffield, said that even after nearly 40 years there is a still a profound void.

“I miss her very much every day,” she said, wiping away tears. “Today I still have pictures of her all over my house. I have her paintings. She was an excellent artist as well as photographer.”

Lansen taught Sheffield how to count to 100, how to put on makeup. “These two men not only robbed me, but they robbed a 7-year-old little girl of her mother,” she said.

Evidence photos of Robert DuBoise’s teeth that supposedly tied him to a bite mark on victim Barbara Grams’ face. Bite-mark analysis has since been broadly rejected by the scientific community.
(Hillsborough County state attorney)

The victim’s daughter chose not to speak, but Warren read a statement on her behalf thanking investigators for their work.

“For me the loss of my beautiful mother will remain a waking nightmare,” she wrote.

The investigation was a collaboration of the Florida Department of Law Enforcement, the Tampa Police Department and the Hillsborough County Sheriff’s Office.

Matteo Cina contributed to this report.