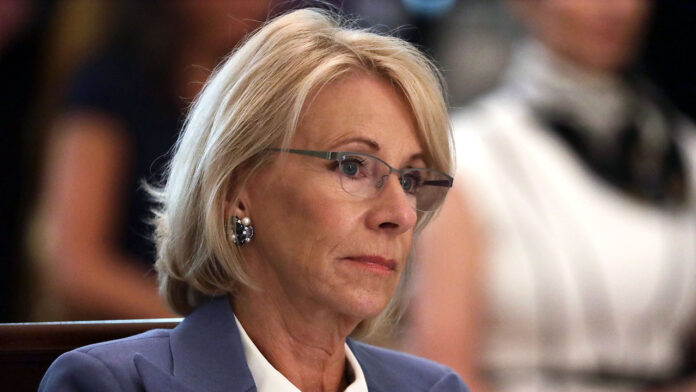 The Department of Education revealed the National Parents and Families Engagement Council earlier this month as a means of finding “constructive ways to help families engage at the local level.” The committee, the department said, will conduct “listening sessions” to explore what schools can do to help students recover from the pandemic.

The announcement did little to soothe parents skeptical of the administration, with many telling Fox Digital they don’t trust Education Secretary Miguel Cardona to lead on education.

DeVos shared some of their concerns.

“I think it’s a very laughable attempt to address what is a very glaring – clearly glaring issue,” she reacted. “Parents across the country are upset for a variety of reasons with how the system has handled the last two years. And they remain upset and they… want to have control of their children’s education.”

DeVos recalled the groundswell of parents over the past two years after they became aware of what their children were being exposed to in their classrooms due to forced at-home learning. Parents voiced concerns to local school boards about progressive curricula, strict COVID-19 measures, and more. Those same parents grew more incensed after learning the National School Board Association (NSBA) sent a letter to the Justice Department that requested parents’ actions at school board meetings be examined under the Patriot Act as “domestic terrorists.”

“And where they’ve spoken up in school board meetings, in many cases they’ve been targeted as domestic terrorists, and the FBI has been sent in to investigate,” DeVos added. “So, it’s just incredible to me that they would now set up something called a parents council and then populate it with individuals from all the alphabet soup organizations that simply protect the system and the status quo.”

The president of the National Parents Union voiced public support for the NSBA letter in a back and forth with a parent on Twitter, many of the council’s critics have noted.

FAIRFAX PARENTS REACT AS BOARD VOTES ON PUNISHMENTS FOR STUDENT ‘MISGENDERING’: ‘COMPELLING THEM TO SPEECH’

“If you threaten to kill school board members, you SHOULD hear from the Justice [Department],” National Parents Union President Keri Rodrigues tweeted. “Some of these anti-mask/CRT knuckleheads tried this with us a couple weeks ago.”

“It really is incredible, and I think is a clear indicator that so many of these folks in Washington are completely out of touch with reality,” DeVos responded.

DeVos penned a new book about parents’ role in education, “Hostages No More: The Fight for Education Freedom and the Future of the American Child,” telling Fox Digital that the parental uprising of the past two years was not just phase.

“I think parents have been awakened in ways that I have not even imagined pre-pandemic,” she said.

Education Secretary Betsy DeVos listens during a Cabinet meeting at the White House on May 19, 2020.
(Alex Wong/Getty Images)

“They are ready to take action and make sure their kids have opportunities and have places to learn that are actually going to work for them, that are student-focused, not system-focused,” she later added.

DeVos also slammed the administration for its rumored plans for Title IX. The Biden White House proposed new plans for Title IX, the civil rights law that prohibits sex-based discrimination in schools and which celebrates its 50th anniversary Thursday, signaling an intent to expand the definition of “sex” to include “gender” and “gender identity.”

“That they would attempt to expand the definition of biological sex through a rulemaking process, it really is a bridge too far,” DeVos told Fox News Digital a day before the announcement. “And I hope that, and I trust that many people will raise their voices if what is rumored to be true actually unfolds.”