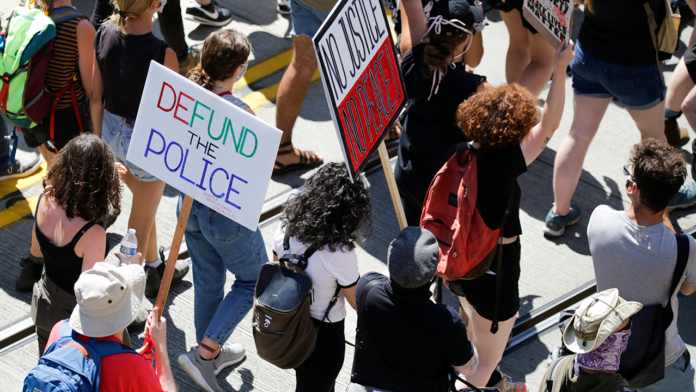 House Republicans on Thursday accused Democrats of trying to hide their prior support for the “defund the police” movement by passing a string of public safety bills just weeks before the midterm elections.

Democrats passed four bills Thursday afternoon that would make available billions of dollars in new grant funding that states and localities could use to fund police training as well as efforts outside the police department to boost community safety. But Republicans said the bills are an attempt to get voters to forget their past support for defunding police departments across the country.

“They want to take money from communities who funded their police and give it to communities who didn’t so they can get past this whole ‘defund the police’ that’s been their mantra for the last couple of years,” said Rep. Jim Jordan, R-Ohio, of the Democratic bills.

Rep. Michelle Fischbach, R-Minn., said Democrats did not call up the bills to “solve a problem,” but “so my Democrat colleagues can look like they are solving problems.”

“It’s very telling that the Democrats will pay lip service to police but when it comes time to back the blue, they walk away because they don’t support the police,” he said. “They embrace the defund the police movement, and they can’t stand up to the radical left who really wants to undermine police all across America. I think it’s disgraceful.”

Republicans roundly rejected three of the bills called up by Democrats. One of those was the Mental Health Justice Act, which would let the Department of Justice distribute $1.25 billion in grant funding over five years for the training and use of mental health workers “in lieu” of law enforcement officers.

Rep. Kelly Armstrong, R-N.D., said the bill is “dangerous” because it explicitly allows these workers to operate independently from police, and called it a “Trojan horse” for the “defund the police” movement.

“They don’t want to fund the police, they want to addict the police to the federal dollar, and that comes with a more efficient way to ensure centralized decision-making,” Gaetz said of the bill.

And, Republicans broadly rejected the VICTIM Act, which would let the Justice Department disburse $1 billion over 10 years so local police can hire “victim support personnel” and additional investigators to solve unsolved crimes.

Republicans did support one of the bills called up on Thursday. Most GOP lawmakers in the House voted for the Invest to Protect Act, which would let the Justice Department distribute $300 million over five years to local law enforcement officers to increase their access to training and mental health resources.

The package of bills almost didn’t get to a vote on Thursday due to disagreement over the moderate and liberal wings of the Democratic Party. The two factions agreed Wednesday to call up the four bills, but just before the legislation was debated, House leaders recessed in a scramble to find enough Democrats to vote to start the process.

Four Democrats voted against starting the debate, and one voted “present,” a sign that Democratic leaders were not able to convince all Democrats to support the bills. In the end, the House just barely voted to begin debate in a 216-215 vote, and only did so by ignoring a Republican request to wait for one last Republican to show up and vote – Rep. Liz Cheney, R-Wyo.

Pete Kasperowicz is a politics editor at Fox News Digital. He can be reached at Peter.Kasperowicz@Fox.com and his Twitter handle is @PeteKDCNews.