HomeNewsAmericaHimes, Steil say economic disparity is 'not a Democrat thing or a...
NewsAmerica 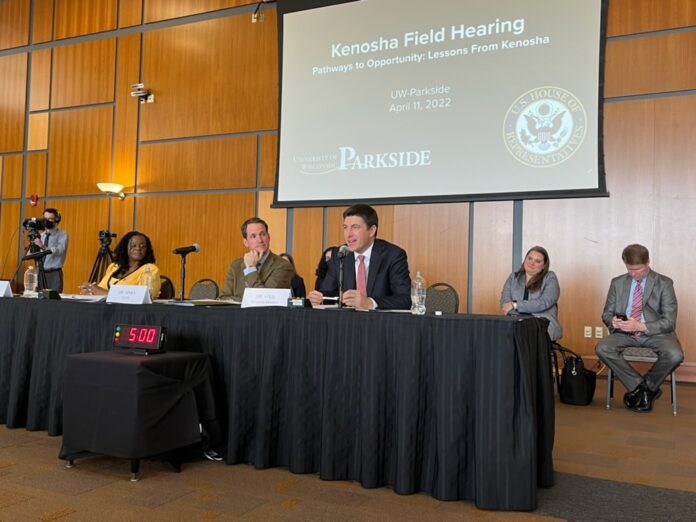 EXCLUSIVE: Democrats and Republicans from the House Committee on Economic Disparity & Fairness in Growth are in Wisconsin this week to meet with local leaders to discuss issues facing their communities, and hope to work in a bipartisan way to address those challenges, telling Fox News Digital that “it’s not a Democrat thing or a Republican thing,” but something facing all Americans.

In an exclusive joint-interview with Fox News Digital, committee Chairman Jim Himes, D-Conn., and Ranking Member Bryan Steil, R-Wis., said they have the “opportunity” this week to actually “listen” to the American people.

REP. HIMES SAYS FAILURE TO INVEST IN EARLY CHILDHOOD EDUCATION ‘OUGHT TO TROUBLE’ DEMOCRATS AND REPUBLICANS

“The issue of economic disparity is too important and means too much to too many Americans for us to grandstand and suggest the problems are simple,” Himes told Fox News Digital. “There is too much going on for Democrats to pretend we have all of the answers, and that Republicans are always wrong— it all just means too much for too many people.”

He added: “We will stand by what we believe, but lean heavily into areas where there is overlap, because, frankly, in this Congress, nothing is getting done without bipartisan support.”

The trip crosses into Kenosha, Wis., which is part of Steil’s district.

“There is economic disparity everywhere you look,” Steil said. “Its not a Democrat thing or a Republican thing.”

Steil said that while he and Himes work together on the committee, they often “disagree pretty viscerally.”

Himes added that the committee is “conscious of the fact we have a lot of division in this country.”

“In my opinion, a lot of the disparity and giving up on the American dream leads to some of the political anger we have out in America today,” Himes said, adding that he is “excited to study the problems a little more closely” and come up with “solutions.”

The field visit comes as Americans are struggling with rising inflation— which hit a 40-year-high in February. The consumer price index climbed 7.9% on an annual basis. Month over month, according to the data, inflation rose 0.8%.

The year-over-year reading is in line with estimates and compares with an annual 7.5% jump in January, marking the fastest increase since February 1982, when inflation hit 7.6%.

Gas jumped 6.6% in February and accounted for almost a third of price hikes, according to the Bureau of Labor Statistics data released Thursday. Food prices, in comparison, rose by 1%.

The February data were recorded before the start of the Russia-Ukraine conflict, which has pushed prices at the pump to over $4.00 per gallon across the nation.

President Biden, last month, announced a ban on all imports of Russian oil, gas and energy to the United States, targeting the “main artery” of Russia’s economy amid Russian President Vladimir Putin’s war on Ukraine. Biden warned that the ban would cost American families.

But even amid rising inflation, the Biden administration is touting job growth—using the March jobs report as evidence that the economy is coming back to life in the wake of the COVID-19 pandemic.

His comments came shortly after the Labor Department said in its monthly report that payrolls in March rose by 431,000, slightly missing the 480,000 jobs forecast by Refinitiv economists. The unemployment rate, which is calculated based on a separate survey, fell to 3.6%, the lowest level since February 2020.

Millions of workers are seeing the largest pay gains in years, as companies compete with one another for a limited number of employees: Wages climbed 5.6% in March from the previous year, nearly double the pre-pandemic average of 3%.

Many of those gains have been eroded, however, by the hottest inflation in nearly four decades that has pushed the price of everyday necessities like gasoline, clothing and food significantly higher – which Biden acknowledged.

Meanwhile, Himes and Steil— along with RepGwen Moore, D-Wis., are participating in a number of field hearings and events in Milwaukee and Kenosha this week. The lawmakers plan to examine issues like affordable housing, higher education, and community workforce development.

A committee aide told Fox News that they are expected to hold public events with local civic leaders and community members to discuss some of the “most pressing economic issues” facing the region.

On Monday, lawmakers participated in a field hearing “Pathways to Opportunity: Lessons from Kenosha,” which took place at the University of Wisconsin-Parkside in Kenosha. The hearing focused on education paths, and ways that allow workers to enter, re-enter, and remain in the workforce.

Himes, in an interview with Fox News in December, discussed his committee’s work in “examining the increasingly significant disparities in American wealth and income” and told Fox News the work is “important” for a number of reasons.

“Number one, there is a moral dimension,” he said, at the time. “Two, there is an economic problem — you can reach a point in disparity where your economy as a whole suffers because productivity goes down, and the middle class doesn’t have purchasing power, etcetera.”

He added: “And then there is a political dimension to it as well. I am a believer that when enough Americans feel they don’t have a stake in the system, our democracy is at risk.”