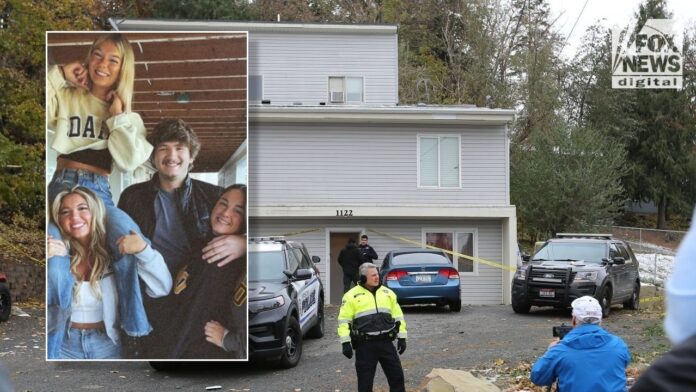 Idaho law enforcement officials overseeing the violent murders of four local university students 10 days ago are asking the public for patience as they sift through over 1,000 tips and thousands of photos, in addition to over 100 pieces of evidence, authorities said Wednesday.

“We all want to understand why this happened and what drove someone to do this,” Moscow, Idaho, Police Chief James Fry told reporters Wednesday afternoon.

University of Idaho students Ethan Chapin, 20; Kaylee Goncalves, 21; Xana Kernodle, 20; and 21-year-old Madison Mogen were stabbed several times and killed in the early morning hours of Nov. 13, officials have said. Police have not identified any suspects.

Moscow police received a call shortly before noon on Nov. 13 for a report of an “unconscious person” at the King Road home. Several other people had gathered at the crime scene by the time police arrived, officials said.

According to police, the 911 call “originated from inside the residence,” and came from one of the surviving roommates’ cell phones. Police said several people spoke to the dispatcher before officers arrived.

UNIVERSITY OF IDAHO STUDENTS KILLED: A TIMELINE OF EVENTS

Investigators have determined all four were likely stabbed in their sleep sometime between 3 a.m. and 4 a.m., after they had returned home from a night out. Some of the victims appeared to have tried to defend themselves.

Police have named the four victims of an apparent quadruple homicide at the University of Idaho as Maddie Mogen, Ethan Chapin, Xana Kernodle and Kaylee Goncalves.
(Instagram: @maddiemogen, @kayleegoncalves, @ethanchapin4)

All four victims are believed to have been killed using a single “fix-blade knife,” which has not yet been recovered.

Two other roommates were inside the home, on the bottom floor, at the time of the murders, but were uninjured.

After the police department’s initial response to the scene, investigators and a forensics team were brought in to process the scene for any possible evidence, Wills said.

Investigators then package the evidence and move it to forensics labs to be analyzed further, he said.

“All of this takes an immense amount of time,” he said. “While this is such a tragic circumstance that we find ourselves in, in law enforcement, we believe we owe this to the surviving families to get this right.”

Investigators collected 103 pieces of evidence from the crime scene, and took an estimated 4,000 photos, Wills said.

“We’ve conducted multiple 3D scans of the residence, and we have hundreds of hours used by technicians and investigators, including our forensics teams and detectives from multiple agencies,” Wills continued.

He added that investigators had processed “over a thousand tips and conducted 150 interviews.”

Meanwhile, officials said late Tuesday that investigators had received information that Goncalves could have had a stalker. Investigators “looked extensively” into those reports, and “have pursued hundreds of pieces of information” related to the stalker tip.

As of Wednesday, they had been unable to confirm the information or identify a stalker. Moscow Police Captain Roger Lanier added that police learned while conducting interviews that Goncalves “had made some comments about a stalker.”

“And we have followed up looking at specific time frames and specific areas of town,” he continued. “So far, we have not been able to corroborate it. But we’re not done looking into that piece of information.”

Investigators are asking the public to share “all outside surveillance video taken from 3 a.m. to 6 a.m. on Sunday, Nov. 13, 2022, from businesses and residences within” a specific area. A map of the area is below.

MPD had assigned four detectives, 24 patrol officers and five support staff employees to the criminal investigation. The FBI has 22 investigators in Moscow, 20 agents in other areas of the U.S. and two Behavioral Analysis Unit agents working on the case.

The Idaho State Police has deployed 20 investigators, 15 state troopers, a public information officer and a forensic services team to the scene, as well as 15 uniformed troopers to assist with other patrols.

A general view of the house at 1122 King Rd., Moscow, Idaho on Monday.
(Derek Shook for Fox News Digital)

Authorities have also created a dedicated webpage related to the King Road attack.

“We ask anyone with any information related to what happened with these four were in our community, their interaction with others and whether they expressed concern or commented about someone or something strange to get that information to us,” Chief Fry said Wednesday. “Even if you don’t believe it is relevant, investigators will review and determine if and how your information builds the picture.”

He added: “Sometimes what a video or picture doesn’t show is equally as important as what might be there.”

The Moscow Police Department is urging the public to submit any images or information that they think could be important or useful to their investigation. They can do so by calling 208-883-7180 or submitting tips through tipline@ci.moscow.id.us.

Stephanie Pagones is a Digital Reporter for FOX Business and Fox News. Story tips can be sent to stephanie.pagones@fox.com and on Twitter: @steph_pagones.