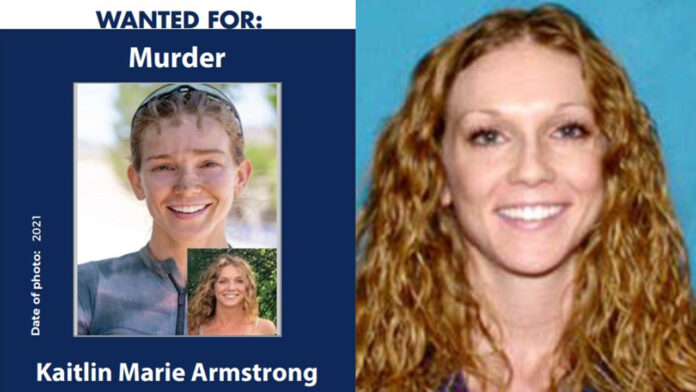 Kaitlin Armstrong, the fugitive yoga instructor wanted in connection with the May 11 murder of pro-cyclist Anna Moriah “Mo” Wilson in Austin, sold her black Jeep Grand Cherokee for more than $12,000 before fleeing Texas, authorities revealed Thursday.

Armstrong, 34, sold the vehicle, which was spotted near the crime scene around the time of Wilson’s shooting death, on May 13 – one day after she was questioned and released by Texas authorities, the US Marshals Service announced in a press release. She allegedly sold the SUV through a CarMax dealership in Austin and made off with a check for $12,200.

She hopped on a plane – and then took several more flights – starting the next day, officials have said.

In addition to the murder count for which she was originally wanted, Armstrong was charged federally on May 25 with unlawful flight to avoid prosecution. The reward for her capture has climbed to $21,000, officials said.

Marshals previously described how Armstrong had traveled from Austin International Bergstrom Airport to New York’s LaGuardia Airport on the afternoon of May 14. She allegedly boarded Flight #WN2262 from AIBA to Houston Hobby Airport at 12:30 p.m. local time, and then took a connecting flight via Southwest Airlines Flight #WN30 to New York.

Investigators later revealed that Armstrong “was dropped off at the Newark Liberty International Airport May 18, a day after Austin police obtained a warrant for her arrest.” But her name was not linked to any of the outbound flights from Newark airport at the time, Marshals said.

Last week, Fox News Digital spoke with a camper at a secluded, sweeping property known as “Camp Haven” or “Haven for Humanity” in Livingston Manor, New York. The camper confirmed not only that Armstrong’s sister, Christine, lived there, but also that agents with the Marshals Service had been there to speak with the sister.

He also revealed that Kaitlin Armstrong had recently stayed there.

“She was [here] a while back,” he said. “Right before the whole thing blew up.”

Marshals are aware of a campground in upstate New York in connection with their interstate manhunt for Kaitlin Armstrong.
(Stephanie Pagones/Fox News Digital)

The Livingston Manor address appeared on property records in connection with Christine Armstrong, 31, on May 17, a source told Fox News Digital. The campsite is about a 2-hour, 20-minute drive from Newark Liberty International Airport and is roughly the same distance from LaGuardia Airport.

Armstrong’s sister did not respond to Fox News Digital’s multiple requests for comment.

Marshals confirmed that they were aware of the location as part of the manhunt but stopped short of confirming the camper’s account.

“We don’t know if she was actually at that specific location,” Deputy U.S. Marshal Brandon Filla told Fox News Digital at the time. “There are many possibilities, but we have to have facts.”

Federal and local law enforcement have described evidence that shows Armstrong followed her longtime boyfriend, Colin Strickland, while he was out with Wilson earlier in the day on May 11. Strickland and Wilson allegedly went swimming at Deep Eddy pool in Austin before eating at a local restaurant. Investigators have said that Strickland dropped Wilson at her friend’s home, where she was staying at the time, and then left.

Surveillance video shows Armstrong at an airport after she fled Texas.
(US Marshals)

According to Armstrong’s arrest warrant, Armstrong’s vehicle “appears to stop next to Wilson’s friend’s residence” just minutes after Strickland had left Wilson.

“Video surveillance shows Strickland leaving the area after dropping off Wilson and shows Armstrong’s vehicle driving to the East Austin residence where Wilson was staying,” the warrant states. “Armstrong has made prior statements expressing a desire to kill Wilson.”

Austin Police Department (APD) investigators have linked one of the guns found in Armstrong’s home to the weapon used to kill Wilson on the night of May 11, APD Homicide Det. Richard Spitler previously said. On May 12, investigators executed a search warrant at Armstrong’s home, which she shared with Strickland, he said.

They later test-fired the weapon, a Sig-Sauer P365 9mm, and compared the spent shell casing to ballistic evidence recovered at the scene, according to the arrest warrant.

“The potential that the same firearm was involved is significant,” the warrant states.

Days before the murder warrant was issued, police had interviewed Strickland and located Armstrong, who was arrested for a misdemeanor warrant out of Travis County from 2018.

“Armstrong was questioned about her vehicle being in the area as pictured on the Ring camera. However, she would not confirm or deny being in the area of the murder and quickly terminated the interview,” Spitler said.

“She was then mistakenly released from custody on the misdemeanor warrant” because her date of birth in the department’s report management system did not match the date of birth on the warrant, he said.

Investigators say Armstrong should now be considered armed and dangerous.

Authorities describe Armstrong as White, 5 feet, 8 inches tall and weighing about 125 pounds. She has hazel eyes and was last seen with long, curly hair wearing a blue denim jacket and white jeans.

“Kaitlin Armstrong is accused of a very serious crime that she needs to answer for,” U.S. Marshal for the Western District of Texas Susan Pamerleau said last week. “The best thing she can do at this point, wherever she is, is surrender to authorities, so she can return safely to Austin and answer the charges against her. She needs to know the Marshals are not going to stop looking for her.”

Stephanie Pagones is a Digital Reporter for FOX Business and Fox News. Story tips can be sent to stephanie.pagones@fox.com and on Twitter: @steph_pagones.