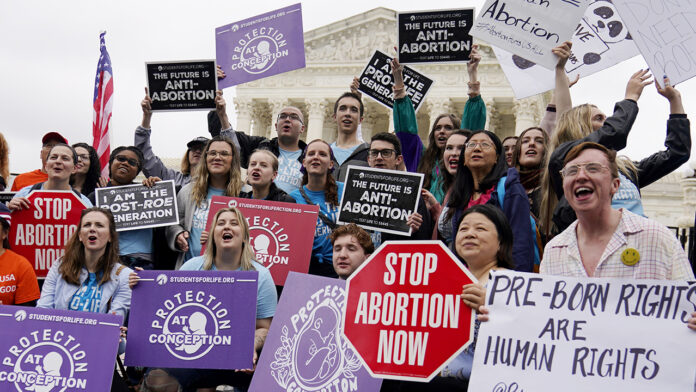 Thirteen states in the country are poised to enact immediate abortion bans and at least 13 more could quickly follow suit after the Supreme Court overturned Roe v. Wade on Friday, leaving abortion rights up to the states to decide.

At least 13 states in the country have so-called “trigger laws” banning most abortions that will take effect immediately or within weeks of Roe v. Wade being overturned.

Demonstrators protest outside the U.S. Supreme Court, May 16, 2022, in Washington.
(AP Photo/Mariam Zuhaib)

There are also five additional states – Alabama, Arizona, Michigan, West Virginia and Wisconsin – that still have an abortion ban on the books from before Roe v. Wade that will go into effect now that the 1973 landmark law is overturned.

The Democratic governors of Michigan and Wisconsin have pushed back against those laws: Michigan Gov. Gretchen Whitmer filed a lawsuit in April asking the Michigan Supreme Court to stop enforcement of the state’s 1931 abortion ban, and Wisconsin Gov. Tony Evers has called for the repeal of an 1849 state law that makes abortion a felony.

People protest after the leak of a draft opinion written by Justice Samuel Alito that would overturn Roe v. Wade, in New York City, May 3, 2022.
(Reuters/Yana Paskova )

Thus, the overturning of Roe v. Wade causes at least 18 states to ban most abortions almost immediately, according to Guttmacher’s research.

Four additional states – Georgia, Iowa, Ohio and South Carolina – all have laws banning abortions after the six-week mark, which were previously ruled unconstitutional but will be revisited now that Roe is overturned.

Pro-choice activists rally at the Washington Monument before a march to the U.S. Supreme Court in Washington, May 14, 2022.
(Jose Luis Magana/AFP via Getty Images)

In addition, Florida, Indiana, Montana and Nebraska appear likely, based on current legislative efforts, to move to ban or severely restrict abortions now that Roe is overturned.

Meanwhile, abortion access is expected to continue or even expand in blue states like California and Oregon, which have moved to protect abortion rights in recent weeks.

Jessica Chasmar is a reporter for Fox News Digital. Story tips can be sent to Jessica.Chasmar@fox.com and on Twitter: @JessicaChasmar.