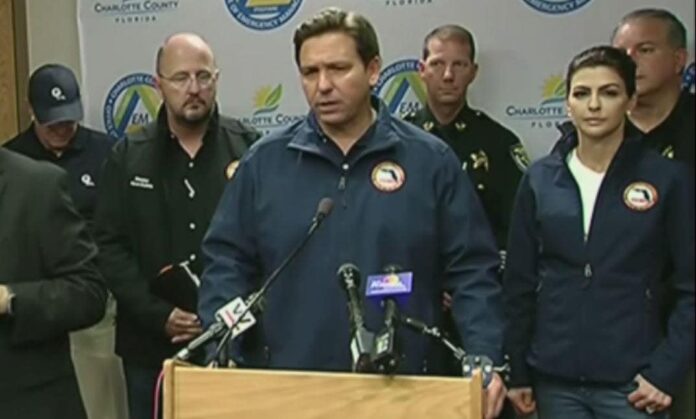 Grunwald appeared on MSNBC’s “The ReidOut” Monday to discuss the ongoing recovery efforts in Florida after the Category 4 hurricane made landfall on Wednesday. Host Joy Reid criticized the state and DeSantis for Lee County not declaring a mandatory evacuation until the day before the storm hit.

“Ron DeSantis has been very angrily defensive, I guess is a good way to describe it, when people ask him about this delay in the evacuation order. They waited even though their plan was if it’s a 10% probability of flooding, call for a mandatory evacuation. It was like a 40% chance and they didn’t. What do you make of the fact that they didn’t do a mandatory evacuation in a place that people that run the state have got to know is super vulnerable?” Reid asked.

Though Grunwald acknowledged that Florida continues to be a growing state under DeSantis, he also accused the governor’s “free state” attitude of likely contributing to the late evacuation and heavy losses in Lee County.

John Quigley carries a piece of artwork made by his daughter, the only thing he found to salvage from his collapsed home, as he pulls his girlfriend’s son Sebastian in a cart while walking off the island, two days after the passage of Hurricane Ian, in Fort Myers Beach, Florida, Friday, Sept. 30, 2022.
(AP Photo/Rebecca Blackwell)

“Yeah, I mean, it’s really horrible, and you don’t want to point too many fingers until you know all the facts. But there’s no doubt that there’s a hesitation to tell people you’ve got to leave, right? Because part of the whole gestalt really of DeSantis and Florida Republicans who have run this state for a couple of decades is this is the free state of Florida. Don’t tread on us. You can’t tell us what to do. Nobody is going to lecture you about wearing masks or taking vaccines or for that matter where you can build your house or how often you can water your lawn,” Grunwald said.

He added, “People ought to understand who are so baffled by why this swing state has become a red state. They should understand that this is a very attractive vision to a lot of people, and eight of the nine fastest growing cities in Florida are cities that voted for Donald Trump. But again, sometimes the cost of not planning for the future and not investing in the future, you can see it when the waters start to rise, and then of course the [state] government turns to the feds to bail us out.”

AFTER HURRICANE IAN, MSNBC ANALYST PREDICTS RON DESANTIS IS ‘ABOUT TO BECOME A BIG GOVERNMENT REPUBLICAN’

Other media pundits have begun attacking DeSantis after reports of Lee County’s late mandatory evacuation become more well known. However, hurricane reports did not place Lee County under critical threat until Tuesday, leading to the eventual order. DeSantis himself pushed back against such criticisms on Sunday.

Cars are submerged in a flooded street in the aftermath of Hurricane Ian on September 29, 2022 in Orlando, Florida.  (Photo by Paul Hennessy/Anadolu Agency via Getty Images)

“But I think part of it was, so much attention was paid to Tampa, a lot of them thought they wouldn’t get the worst of it but they did, and I think it is easy to second-guess them. But they were ready for it the whole time and made that call when [it] was justifiable to do so,” DeSantis said.

Lindsay Kornick is an associate editor for Fox News Digital. Story tips can be sent to lindsay.kornick@fox.com and on Twitter: @lmkornick.