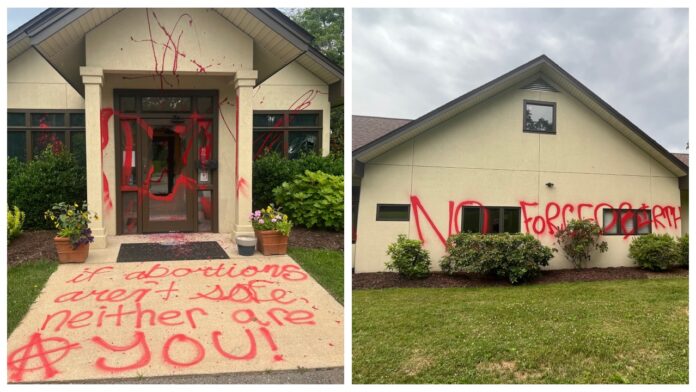 A Christian faith-based pregnancy center in North Carolina recently vandalized by a radical pro-abortion group asserted that their organization is “not going to live in fear” amid ongoing threats.

“We don’t force [pregnant women] into any choice or decision,” said Kristi Brown, the executive director of Mountain Area Pregnancy Services (MAPS) in Asheville, North Carolina. “So for us to be attacked because we’re viewed as limiting choice, they don’t even understand what we do in this building. That’s the crazy part about this.”

MAPS was among the several crisis pregnancy centers nationwide damaged earlier this month in acts of arson or vandalism, later claimed by the radical pro-abortion group dubbed Jane’s Revenge. The group has declared “open season” on such pro-life establishments since the Dobbs v. Jackson Women’s Health Organization draft opinion leaked, which suggested the Supreme Court is poised to overturn Roe v. Wade.

Police also said a forensic team found blood on one of the broken windows, suggesting the vandal may have been injured.

“It was disheartening to drive on property the day it happened and see the vandalism,” Brown said, noting how the destruction was “visually alarming for sure.”

“But we’re not living in fear,” she continued. “We’re continuing to serve clients and to do what we do best. We’re being smart, for sure. We’re aware of our surroundings, that’s why we have this extra security on site right now. So we’re being smart about future steps, but we’re not going to live in fear because of this.”

Brown explained how her organization remains unsure whether those who vandalized their property were locals or from out of town. Still, she noted how in their June 14 statement claiming responsibility, Jane’s Revenge indicated they have groups all over.

“You have seen that we are real, and that we are not merely pushing empty words. As we said: we are not one group but many,” Jane’s Revenge wrote in the letter, which was first disseminated to email subscribers as an “Abolition Media” blog post. The group has also called for a “Night of Rage” beginning at 8 p.m. on whatever date the Dobbs decision is handed down.

The group appealed to anyone “with the urge to paint, to burn, to cut, to jam” to commit violence.

Explaining how MAPS is “a Christ-centered 501(c)(3) nonprofit” based on biblical principles, Brown said she and her organization see the increasing vandalism of pro-life establishments as “truly spiritual warfare.”

ACTIVIST GROUP THREATENS TO ‘BURN EUCHARIST‘ IN DISPLAY OF ‘DISGUST‘ TOWARD CATHOLICS: ‘BIGOTRY‘

“I have defined what happened to our building as pure evil, that’s how I define that,” she said. “And it’s definitely spiritual warfare. Because the irony in this is the pregnancy centers are being attacked because we’re viewed as anti-choice, anti-abortion. And yes, we are life-affirming and don’t refer for abortion, but every woman that sees us and that we serve has total choice as to what she wants to do.”

As the pending Supreme Court decision looms, Brown’s organization is taking extra steps to prevent another attack on its facilities. The group has undergone two security assessments in the past week to determine what they are doing well and how they can improve. She said their existing camera and alarm system might need an overhaul, and they are also taking measures to make it harder to break their windows.

They are also taking steps to shore up their cybersecurity and have considered hiring private security. However, off-duty officers from the Asheville Police Department (ADP) have been patrolling their property lately. A spokesperson for APD told Fox News Digital that their investigation into the incident remains active, but that they had no updates.

“I told someone last week, I do not think any pregnancy center in America right now is safe,” Brown said. “You never think it’s going to happen to you and, you know, it happened to us. I think the longer we wait on the Supreme Court ruling, I think that does not help the situation because everybody’s anxious as to how they are going to rule.”

“We hope and pray that we’re not further attacked in any capacity,” she added.

There have been at least 40 known instances of pro-lifers being targeted with violence, vandalism, and harassment since the draft opinion leaked on May 2, according to a recent report released by Susan B. Anthony Pro-Life America.