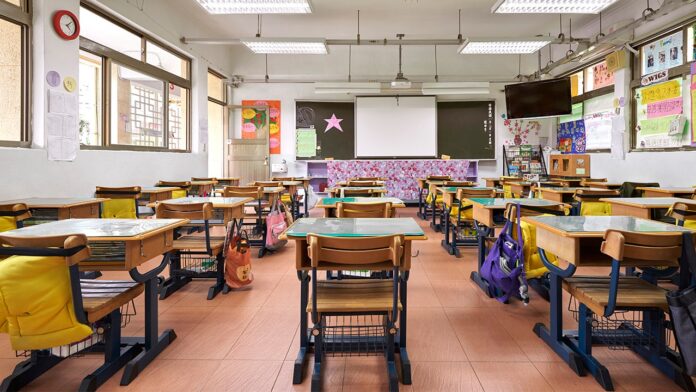 Parents in Hilliard, Ohio, are frustrated with the school district for allowing teachers to wear QR code-enabled badges that link to a website that showcases sexually explicit material.

The National Education Association and its local affiliate in Hilliard have been providing staff in the school district with the QR code-enabled badges as a way to reach out to LGBTQ+ students, according to local reports. The code links to the “NEA LGBTQ+ Caucus” website and resources from gender activist organizations including Scarleteen, Sex, Etc., Gender Spectrum, The Trevor Project, and Teen Health Source, education activist Christopher Rufo recently highlighted on his website.

Interior of classroom in elementary school. Row of empty desks are in illuminated room.
(iStock)

“The badge has a QR code that once scanned takes you to a website that has extremely inappropriate information and as a parent that crosses the line,” said Lisa Chaffee, a Hilliard parent with Ohio Parents Rights in Education.

Hilliard Schools Superintendent Dave Stewart, who defended the badges as sharing a “message of safety and inclusion for all students” in a statement to ABC 6, said the QR codes were not intended for students, but as resources for the teachers. He said the teachers were aware of it, but “out of an abundance of caution,” they were given additional guidance on the badges, including that it might be in their best interest to “cover” the QR code.

Kristin Jackson said her daughter suffered socially as a result of virtual learning and mask mandates in school.
( Allison Dinner/Bloomberg via Getty Images)

“The QR code on the back of the badge is not there to be shared with students; rather, it is provided to adults by the NEA should they be interested in learning more about LGTBQ+ issues and supporting LGBTQ+ students. Any teacher who chose to wear one of the badges clearly understood that the resources at the link were intended for adults, not students. The resources are provided for teachers’ personal growth and professional development. No teacher was ever required to wear one of the badges or access any of the resources linked to the QR code.

“Additionally, out of an abundance of caution, teachers have received the following guidance from their association leadership regarding the badges:

“The Hilliard City School District remains committed to ensuring that all students feel safe, included, and welcomed in their learning experience. While the badges were not created or provided by the Hilliard City School District, the district embraces the inclusive nature of the message. Questions about the specific resources provided to teachers should be directed to the NEA or HEA.”

CALIFORNIA TEACHER SPEAKS OUT AFTER ‘QUEER LIBRARY’ WITH BDSM/KINK EXPOSED: ‘I BELIEVE… IN WHAT I’M DOING’

Columbus Education Association teachers strike outside of a Columbus City School following the union’s rejection of the recent board proposal.
(Credit: WNBS)

Parents in other states are sounding off on classroom material they argue is inappropriate for adolescents, including an Oklahoma parent who warned of a teacher directing students how to access “pornographic” books via a QR code. The QR code took students to the Brooklyn Public Library Books Unbanned site, which is designed to give students access to books that are removed from, or otherwise challenged, in libraries and schools.

“I want people who follow me to know that I believe very much in what I’m doing, and I think my history as a teacher speaks for itself. I know the prevalence of cruelty and ignorance can often be very disappointing, but I still believe, as I hope you do, in the supremacy of love,” she said.

The district said they did not endorse the teacher’s comments.

“The district does not endorse the personal statements of any individuals speaking in their capacity as private citizens. Our jurisdiction only extends to comments made by employees in their official capacities,” the Capistrano school district told Fox News Digital.