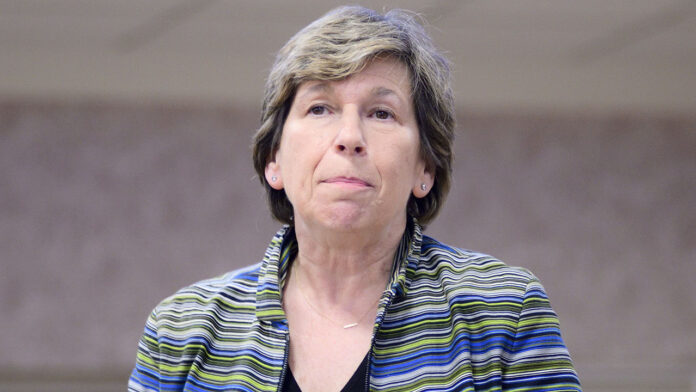 Parents and activists are fuming over remarks made by American Federation of Teachers President Randi Weingarten at a teachers’ conference Wednesday accusing conservatives of undermining the work of educators.

“Conservatives are working consistently to undermine educators in this country,” Weingarten said at the New York State United Teachers conference. “They’re in the same race as we are between fear and hope, aspiration and despair, democracy and autocracy. And they’re doing this because our members worked so hard during COVID.”

Elizabeth McCauley of the Virginia Mavens said Weingarten was missing the point as to why parents of all political persuasions were speaking out at school board meetings across the country amid controversies over curriculum and COVID-19 mandates.

“Randi Weingarten seems to miss the point that we the parents truly do want to empower teachers to teach math, science, writing, reading, history (all of it), foreign languages, music, the arts free from the dictates from radical school boards which are hyper focused on indoctrination versus education,” McCauley told Fox News Digital. “Teachers have more restrictions today than ever to walk in line and follow the directives of the political activists on school boards across the country who will not only attempt to fire them for simply stating biology (a boy is a boy and a girl is a girl born that way), but also attempt to indoctrinate them as well through teacher in service training containing everything from (social and emotional learning programs littered with the promotion of CRT to gender fluidity and everything in between).”

“What right wing extremists understand is what Americans understand: That public schools are foundational,” Weingarten continued in her speech.

“As a parent of young children and a product of the public school system myself, I want nothing more than to be able to send my children to public school with full confidence that they will be educated – not indoctrinated,” McCauley responded.

Weingarten singled out Florida Gov. Ron DeSantis, R., and former Education Secretary Betsy DeVos in her speech. Progressives have criticized DeSantis in recent months for signing the Parental Rights in Education bill, which bans discussions of sexuality and gender identity in kindergarten through third grade. Critics have misleadingly labeled the legislation the “Don’t Say Gay” bill.

EXPERTS ON RANDI WEINGARTEN WINNING EIGHTH TERM AT AFT: ‘NEUTRALITY IS NOT WHAT THEY’RE LOOKING FOR’

“If folks like DeSantis and DeVos get their way, kids won’t become critical thinkers and learn the lessons of life,” Weingarten declared. “Schools are a way of creating pluralism and diversity. That’s why there’s censorship of books and lessons, and calling educators ‘woke.'”

More parents pushed back on the union leader’s narrative.

“Nobody has done more than Randi Weingarten to destroy the idea of public schools being foundational,” Fox News contributor Karol Markowicz said. “She blocked the schoolhouse door during COVID and insured that poor kids couldn’t get an education. She used schools being closed to get additional funds for her members. Weingarten destroyed the public school system, primarily in blue states, and wants to do the same everywhere. We have to clean up her wreckage and get kids an education even when she tries to stop it.”

“Randi Weingarten says ‘kids won’t become critical thinkers’?” King told Fox News Digital. “What she fails to realize, is the way public school is going, kids are not learning critical thinking skills now.  She wants to continue to push kids into a failing system because she is only concerned about her own outcomes, not the children’s. Kids are struggling academically now more than ever because of her collusion with the CDC to lock kids out of learning.  That is on top of a system that was already failing to educate kids.  Randi can say whatever she wants, the proof is right in front of us and parents will not let these bureaucrats determine the future of our children.  School choice is on the move and not going away anytime soon.”

People gather to protest different issues including the board’s handling of a sexual assault that happened in a school bathroom in May, vaccine mandates and critical race theory during a Loudoun County School Board meeting in Ashburn, Virginia, U.S., October 26, 2021. Picture taken October 26, 2021.
(REUTERS/Leah Millis)

Parents across the country spoke out against their local school boards for progressive curriculum and strict COVID-19 mandates such as mask mandates and, oftentimes, forced at-home learning that was credited with the backslide in student achievement in several subjects the past two years. And parents had reason to believe the country’s most powerful unions had something to do with the slow walking of a return to in-person instruction.

The AFT and the National Education Association, the two largest teachers unions in the U.S., received a copy of the guidance for a return to in-person learning before the Centers for Disease Control and Prevention released it to the public, emails revealed.

The correspondence, obtained through a Freedom of Information Act request by the conservative watchdog group Americans for Public Trust and provided to The New York Post, found the union offering suggestions to the CDC before the agency stopped a full re-opening of in-person classrooms. The CDC appeared to use the unions’ suggestions word-for-word in more than one instance in the final text of the CDC document.