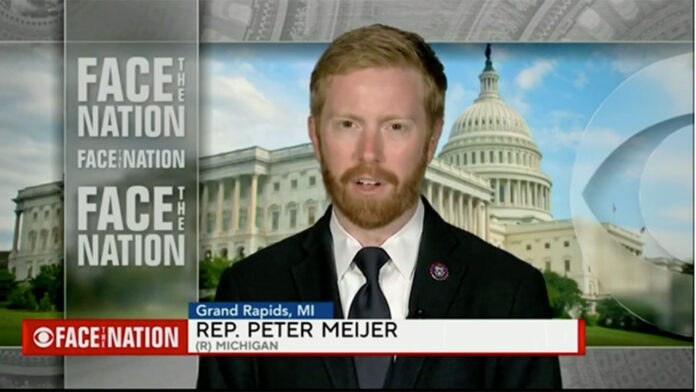 Rep. Peter Meijer, R-Mich., said Sunday that the Democratic Congressional Campaign Committee’s (DCCC) decision to meddle in the GOP House primary for Michigan’s 3rd District was “risky” and “paints a very telling picture of where our politics are in 2022.”

“So we had a scenario where not only did I have the former president aligned against me but in a rare showing of bipartisan unity, Nancy Pelosi and the House Democratic Campaign Committee also united to try to knock me off the ballot. Now, this just highlights the cynicism and hypocrisy of our politics today. And frankly, it will be unknowable what that ultimate impact was. But the fact that we have the establishment left and the extreme right locking arms in common cause paints a very telling picture of where our politics are in 2022,” Meijer told CBS’ Margaret Brennan.

The DCCC said it was spending $425,000 on an ad boosting Gibbs in the Grand Rapids, Michigan area.

“Do you think that ad really made a difference? I mean, Democrats aren’t voting in this primary, it’s Republicans. Why did Michigan Republicans fall for this ad?” Brennan asked.

“I should note that this ad was not aimed at, it was not playing on MSNBC. It was not playing in places where Democratic voters might see it. It was targeted in places to try to sway and convince Republican primary voters to try to give my primary challenger a boost up and over. And I should add that my defeat was by roughly 3% out of over 100,000 votes cast, we lost by less than 4,000 votes,” Meijer said.

Brennan also asked if he believed the Democrats’ strategy was going to be successful.

“So while I think there is certainly a cynical calculus at play with the Democrats’ meddling, this is a risky, dangerous strategy. Where President Biden is in his approval is so in the gutter that it is hard to see that strategy – it is easy to see that strategy backfiring in a spectacular way, which is all the more reason why we should not be embracing the zero-sum idea of politics,” he said.

Democratic groups across the U.S., including the Democratic Governors Association, have been throwing money behind Trump-backed candidates like Gibbs or Maryland Republican gubernatorial nominee Dan Cox in an effort to elect GOP candidates they believe Democrats will have a better chance of beating in the general election.

Several House Democrats have spoken out against the DCCC’s strategy, including Rep. Kathleen Rice, D-N.Y., who said the move was “unconscionable.”

The DCCC celebrated Gibbs’ victory and suggested it would seal the deal for Democrats in the general election.

Hanna Panreck is an associate editor at Fox News.