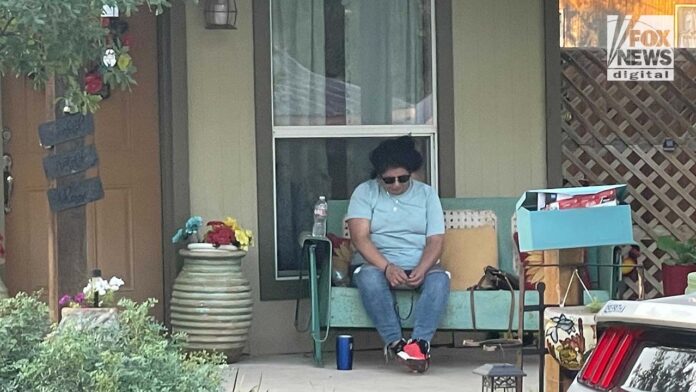 UVALDE, Texas – Adriana Reyes, the mother of Texas school shooting suspect Salvador Ramos, was praying on the front porch of her parents’ Uvalde home on Thursday evening, the same home where her son allegedly shot his grandmother on Tuesday before going on a murderous rampage at an elementary school less than a mile away.

Reyes appeared emotional, rocking back and forth as she murmured prayers and held what looked like a rosary in her hands.

Earlier in the day on Thursday, Reyes’s father, Rolando, told Fox News Digital that his daughter is “feeling bad for everybody,” but added, “She lost her son, too.”

The mother of Texas school shooting suspect Salvador Ramos was praying on the front porch of her parents’ Uvalde home on Thursday evening.
(Fox News Digital)

Ramos is accused of shooting his grandmother in the face inside their home then driving her truck to Robb Elementary School and killing 19 children and two adults.

Rolando, the grandfather, told Fox News Digital on Thursday morning that his wife was conscious but couldn’t talk after a surgery on Wednesday.

University Health hospital in San Antonio listed a 66-year-old female victim, who is presumed to be Ramos’s grandmother, as still in serious condition on Thursday.

Reyes traveled with her wounded mother to San Antonio on Tuesday, but returned to Uvalde that evening apparently in disbelief about her son’s violent rampage, according to her boyfriend’s mother, Maria Alvarez.

“She just said, ‘I came back because I have to find my son. I don’t know where he’s at,'” Alvarez told Fox News Digital about the conversation she had with Reyes at her home several hours after the attack.

Salvador Ramos is accused of shooting his grandmother in the face then killing 19 children and two adults at an elementary school.
(Uvalde Police Department)

Ramos was shot and killed by a U.S. Border Patrol tactical team member inside a classroom about one hour after he entered the school.

Ramos did not have any criminal history and investigators are still trying to identify a motive for the attack.

Rolando, Ramos’s grandfather, told Fox News Digital on Wednesday that his grandson never did anything to indicate that he is capable of this level of violence, but Reyes told ABC News that her son could be aggressive.

“I had an uneasy feeling sometimes, like ‘what are you up to?” Reyes told the news outlet. “He can be aggressive… If he really got mad.”