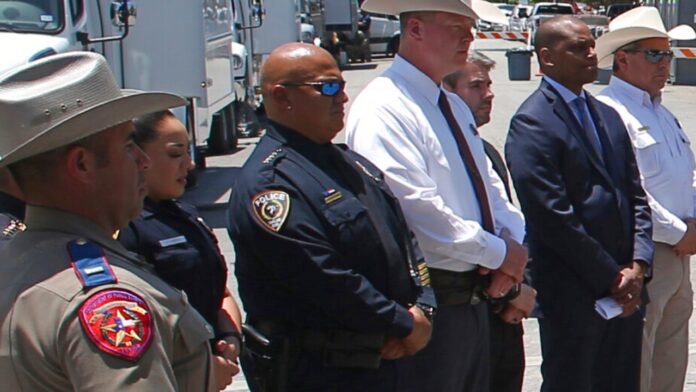 “From the beginning of this horrible event, I shared that the district would wait until the investigation was complete before making personnel decisions,” Harrell explained. “Today, I am still without details of the investigations being conducted by various agencies. Because of the lack of clarity that remains and the unknown timing of when I will receive the results of the investigations, I have made the decision to place Chief Arredondo on administrative leave effective on this date.”

Arredondo has been sharply criticized by everyone from Texas Department of Public Safety Director Steven McCraw to parents in the Uvalde community for his response to last month’s shooting.

Arredondo entered Robb Elementary School just a few minutes after the gunman on May 24, but officers didn’t breach the classroom and take out the suspect for more than 70 minutes, a delay that McCraw called an “abject failure” this week.

“Three minutes after the suspect entered the west building, there was a sufficient number of armed officers wearing body armor to isolate, distract, and neutralize the subject,” McCraw told a special Texas Senate committee on Tuesday.

“The only thing stopping a hallway of dedicated officers from entering Room 111, and 112, was the on-scene commander, who decided to place the lives of officers before the lives of children.”

A ballistic shield and several officers, including some with rifles, were inside the school within 20 minutes of the shooting, but Arredondo decided to hold back and wait for more tactical gear, firepower, and keys to open the door, which wasn’t necessary because the door was unlocked the whole time, according to McCraw.

Arredondo, in his only public comments since the shooting, told the Texas Tribune that he “didn’t issue any orders” and didn’t consider himself the incident commander.

Lieutenant Mike Hernandez, a member of the Uvalde school district’s 6-person police force, will assume the duties of the school police chief, the superintendent said Wednesday.

Paul Best is a reporter for Fox News Digital. Story tips can be sent to Paul.best@fox.com and on Twitter: @KincaidBest.