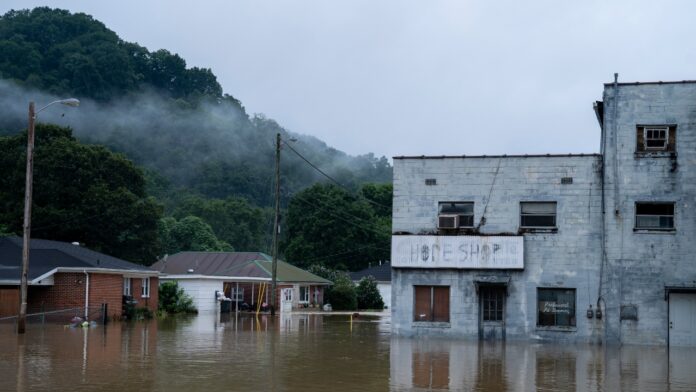 The White House took aim at climate change as President Biden landed in Kentucky on Monday to survey the flooding that killed at least 37 people last week.

White House press secretary Karine Jean-Pierre stated that the flooding is yet another sign that climate change is exacerbating natural disasters. Biden and first lady Jill Biden are set to meet with Democratic Kentucky Gov. Andy Beshear throughout Monday afternoon.

The president and governor will meet with families affected by the flash flooding, which has destroyed homes en-masse.

“The floods in Kentucky and extreme weather all around the country are yet another reminder of the intensifying and accelerate impacts of climate change and the urgent need to invest in making our communities more resilient to it,” Jean-Pierre told reporters aboard Air Force Once during the flight to Kentucky.

KENTUCKY FLOODING DEVASTATION ‘NOTHING LIKE I’D EVER SEEN BEFORE,’ WOLFE COUNTY SEARCH AND RESCUE CHIEF SAYS

Flooding in downtown Jackson, Kentucky on July 29, 2022 in Breathitt County, Kentucky. At least 16 people have been killed and hundreds had to be rescued amid flooding from heavy rainfall.
((Photo by Michael Swensen/Getty Images))

A Perry County school bus, along with other debris, sits in a creek near Jackson, Kentucky, on July 31, 2022. – Rescuers in Kentucky are taking the search effort door-to-door in worsening weather conditions as they brace for a long and grueling effort to locate victims of flooding that devastated the state’s east, its governor said on July 31, 2022.
((Photo by seth herald / AFP) (Photo by SETH HERALD/AFP via Getty Images))

Beshear has deployed more than 400 National Guardsman to the affected region. Victims who lost their homes have had little respite in the days since, with the state suffering 100-degree weather and skyrocketing humidity.

So far, first responders have rescued some 1,300 people amid the debris of washed-away towns.

Biden declared the flooding a federal disaster last week, giving the state access to federal resources to pay for rescue and rehabilitation efforts.