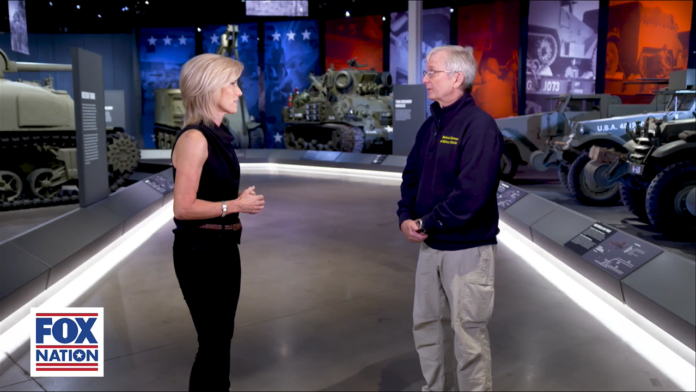 Fox Nation is kicking off a new series, “Hidden Gems,” with Laura Ingraham as she uncovers some of America’s fascinating treasures.

The three-episode premiere starts with a visit to the National Museum of Military Vehicles in Dubois, Wyoming.

Museum creator and CEO Dan Starks told Ingraham that the love and respect he and his wife feel for America’s veterans and U.S. freedom took shape in the form of this military vehicle collection. They eventually opened a display to the public.

Starks explained that he didn’t expect to acquire any more vehicles after he restored his first vehicle, a Sherman Tank, which he purchased to drive through the Dubois Fourth of July parade.

But the expectation didn’t last — and Starks’ collection grew to total 488 military vehicles as of now.

Starks revealed that he and his wife have invested more than $100 million of their own money to bring this museum to life.

“That tells you something about our commitment and passion and how valuable it is to honor and remember our veterans,” he said, “as well as to honor and educate next generations on the history of American freedom.”

Episode two takes viewers behind the scenes of the New Orleans tradition of Mardi Gras. It explores the magic behind the event’s extravagant parade floats and pageantry.

One of the oldest parading organizations, Rex, first came into existence after the Civil War to help bring tourism back to the city.

Rex archivist Dr. Stephen Hales shared with Fox Nation how Rex was only created two weeks before Mardi Gras in 1872.

“They decided that there needed to be a daytime parade,” he said. “They invented that and sent out edicts commanding people to come and join the parade, and people came.”

“Then they sent out edicts commanding people to come visit New Orleans, and they came by the thousands.”

Rex also brought the aspect of unique artwork to Mardi Gras, something often expressed through costumes, jewelry and parade floats.

“Our artists work … for a full year to prepare those floats,” he said.

“They’ll be on the street for a few hours, then they’ll come back in, and we’ll take them apart and start over again.”

Fox Nation programs are viewable on-demand and from your mobile device app, but only for Fox Nation subscribers. Go to Fox Nation to start a free trial and watch the extensive library from your favorite Fox News personalities!