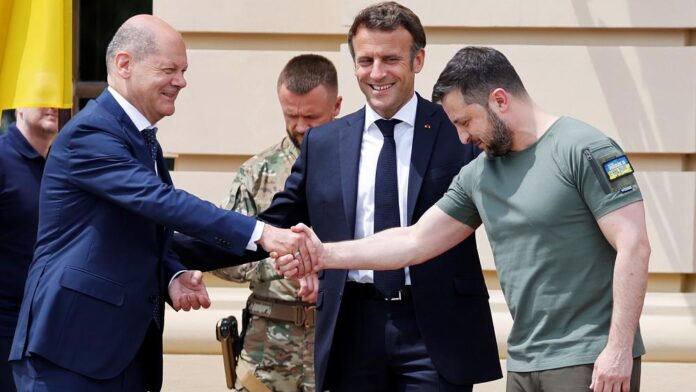 Ukraine has been granted official European Union candidate status, after being endorsed by the bloc’s 27 leaders during a summit in Brussels.

Moldova was also granted candidate status while Georgia was left on the waiting list, pending reforms to ensure the country’s political stability.

“A historic moment,” said European Council President Charles Michel. “Today marks a crucial step on your path towards the EU.”

Michel congratulated Ukrainian President Volodymyr Zelenskyy and Moldovan President Maia Sandu and added “our future is together.” Other EU leaders took to social media to hail the moment.

Zelenskyy “sincerely” commended the decision and said “Ukraine’s future is within the EU.” He then joined the summit virtually to speak with the heads of state and government.

“An unequivocal and strong signal of support for our citizens and Moldova’s European future,” said Sandu.

Candidate status is a largely symbolic designation that recognises the selected country is on track to begin the lengthy, complex and often tortuous accession process.

The candidacy doesn’t automatically guarantee the start of negotiations, let alone their conclusion. Over the past decades, Albania, North Macedonia, Montenegro, Serbia, and Turkey were granted candidate status, with very limited progress towards becoming members. Turkey received the title back in December 1999.

Despite the symbolism, the status does represent a geopolitical victory for Ukraine, a war-torn country that, until earlier this year, was never considered a serious contender to enter the EU. The move is also seen as a response to Russia’s attempt to reinstate its sphere of influence.

“We owe this to the Ukrainian people. They’re fighting for our values,” said French President Emmanuel Macron.

The European Commission has put forward seven key reforms that Ukraine needs to carry out before the end of the year. The list includes the appointment of judges for the Constitutional Court, the fight against corruption and money laundering, the protection of national minorities and the implementation of a law meant to curb the excessive influence of oligarchs in the economy.

The Commission is expected to report back to the European Council by the end of the year about the pace of the reforms undertaken by Ukraine and Moldova, as well as Georgia, who could be granted candidate status at a later stage.

“I know that they will move swiftly,” said European Commission President Ursula von der Leyen, reacting to the news. “They know how crucial this is for their democracies, their economies and their citizens.”

EU leaders will use this report to determine the next step, which could include a more detailed roadmap to open formal negotiations. All major steps in enlargement policy require a unanimous vote of member states.

The Commission has already warned that the entire process is merit-based and can be “reversed if the underlying conditions are not met anymore.”

Thursday’s breakthrough was widely expected to happen following a flurry of support over the past days and an outreach campaign by President Zelenskyy.

It comes a week after a joint trip to Kyiv by Scholz, Macron and Italian PM Mario Draghi. The leaders, speaking on behalf of the EU’s three largest economies, delivered an unmistakable “yes” to granting Ukraine the coveted candidate status.

“Russia wants to show that the European Union is allegedly incapable of being effective and that European values cannot protect freedom,” Zelenskyy said last week, while meeting with Scholz, Macron and Draghi.

“We can and therefore must break this scenario jointly and prove to them that Europe will continue to be free, democratic and, I emphasise once again, this is important – united.”

This article has been updated to include new reactions and developments.