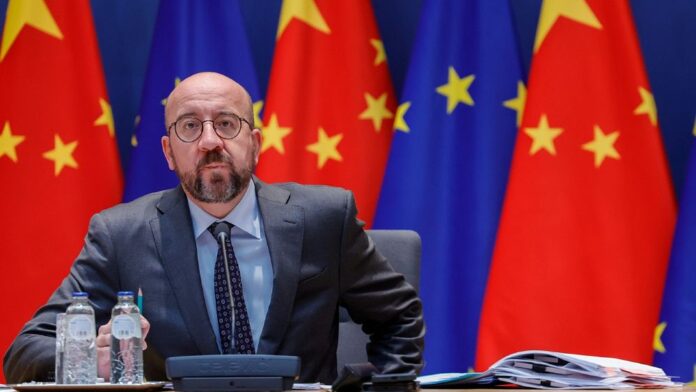 European Council President Charles Michel will travel to China next week to meet with the country’s leadership in a bid to get a sense of where China stands on key issues at “this critical juncture.”

Michel will visit Beijing on December 1 and meet with President Xi Jinping, Prime Minister Li Kepiang and chairman of the Standing Committee of the National People’s Congress Li Zhanshu.

It will come six weeks after the 27 leaders of the European Union held a three-hour-long strategic discussion on China, sparked by the country’s refusal to condemn Russia’s aggression on Ukraine, the growing trade deficit to the benefit of Beijing, and the realisation that the bloc is highly dependent on China for technology and raw materials.

Other concerns include the security implications of Chinese investments in the bloc’s critical infrastructure, China’s assertiveness in the region, and in particular its rhetoric over Taiwan, as well as Xi’s reelection to a third unprecedented term.

“The President got, I think, a clear mandate on what our China policy should be” from that discussion, an EU official said on Thursday.

Michel, he added, “thought it would be good to engage with China since we are at a critical juncture”.

The two will discuss geopolitical developments, the economy and trade ties and other global challenges including climate change, health, as well as rising food and energy prices.

The European leader is meanwhile, expected to raise “questions of human rights and our values,” the official said, including recent developments in Hong Kong and Xinjiang.

It is still unclear whether Michel will take part in a joint press conference with any of his Chinese hosts, owing to the stringent COVID-19 measures in place in the country.

It is also unlikely that the visit will lead to any kind of announcement.

Instead, the EU official said, the visit should be seen as a first engagement and discussions as a deliverable.

“What we think is needed is a new impetus on the relationship and to check what has changed and what are the new parameters,” he said.

Russia, and China’s potential sway over it, will be a key discussion. The EU wants to ensure that China does not provide Russia with weapons or any materials under western embargo.

Here China has sent positive signals in recent weeks, including agreeing to a G20 joint communiqué that deplored “in the strongest terms the aggression by the Russian Federation against Ukraine”.

Michel’s first physical meeting with Xi comes a month after German Chancellor Olaf Scholz travelled to Beijing for a visit and after French President Emmanuel Macron met with the Chinese leader on the sidelines of the G20 summit earlier this month.