Could social media firm Meta have alerted authorities about the Texas shooter? 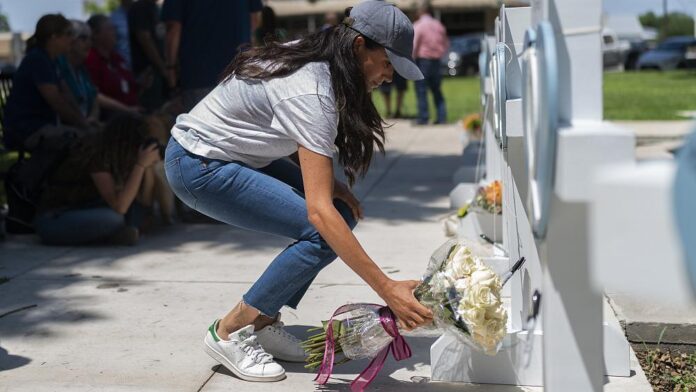 It’s emerged that the Texas shooter sent messages on Facebook of his intentions to shoot up a school, just before carrying out his attack.

On Tuesday, An 18-year-old gunman opened fire on a classroom at a Texas elementary school in Tuesday, killing at least 19 children and two teachers in the deadliest school shooting in nearly a decade.

Before heading to the school, Ramos also shot his grandmother with two military-style rifles he had purchased on his birthday.

It marks the latest scarring moment in a country with a long history of school massacres due to the lack of gun control. The assault at Robb Elementary School in Uvalde was the worst since a gunman killed 20 children and six adults at Sandy Hook Elementary in Newtown, Connecticut, in December 2012.

About 30 minutes before the attacker in Uvalde, Texas began his killing spree, he sent a series of messages on one of Meta’s platforms, warning of his intentions.

“I shot my grandmother in her head,” one message wrote. That was followed by another saying: “Ima go shoot up an elementary school rn.”

A spokesman for Meta later noted that they were one to one private messages.

And it begs the question, could authorities have been alerted before this attack happened?

But it’s easier to scan for things like photos than it is for messages such as “I’m going to shoot an elementary school” – harrowing though it is, could easily be a misplaced, poor joke.

To complicate matters, one wonders whether social media companies should be more actively policing people’s messages.

Meta wants to extend end-to-end encryption to its Messenger app and Instagram. This would mean that only the recipient and sender of a message would be able to read it.

It would seriously impede Meta’s ability to search and flag up messages like those the Texas shooter sent.

It’s led to many governments such as the EU and UK putting pressure on Meta to not go ahead with the encryption plans, but instead go the other way and boost their detection of people’s messages.

Back in April 2021, the UK’s Home Secretary Priti Patel voiced outrage over Meta’s intentions to extend encryption across its platforms, saying the UK government “can not allow a situation where law enforcement’s ability to tackle abhorrent criminal acts and protect victims is severely hampered.”

At the heart of this debate is the never ending battle between privacy and security. In light of the gunman’s messages, many will ask what more could have been done by Meta and what laws, if any, should change.