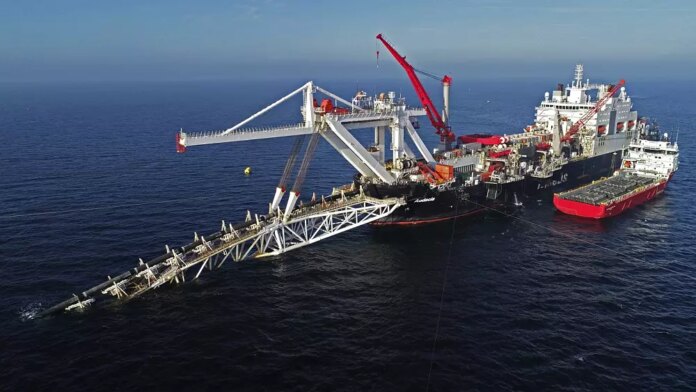 Danish and Swedish authorities have issued navigation warnings after two gas leaks were identified on the Nord Stream 1 pipeline, which the Kremlin shut down earlier this month for an indefinite period of time in retaliation for Western sanctions.

The warnings came shortly after a separate gas leak was detected on a second pipeline Nord Stream 2, a highly controversial project that was frozen by the German government days prior to Russia’s invasion of Ukraine and never became operational.

Neither pipeline is currently carrying gas to Europe, although a certain level of supplies remains inside the infrastructure.

The cause behind the leaks was not immediately clear. An investigation is underway.

“The damage that occurred in one day simultaneously at three lines of offshore pipelines of the Nord Stream system are unprecedented,” said Nord Stream AG, the consortium responsible for the pipelines. “It is impossible to estimate the timeframe for the recovery of the gas transport infrastructure so far.”

The first leak, through Nord Stream 2, was detected on Monday evening in the pipeline’s Danish section of the Baltic Sea, around the island of Bornholm, after a “major pressure drop.”

The Danish Maritime Authority released a navigational warning and established a prohibitive zone within five nautical miles (around 9 km) from the site, considering the leak could pose a danger to naval traffic.

The German government got in touch with the Danish authorities to find out the reasons behind the issue.

“Breakage of gas pipelines is extremely rare, and therefore we see reason to raise the preparedness level as a result of the incidents we have seen over the past 24 hours,” said Kristoffer Bötzauw, director of the Danish Energy Agency.

The agency noted that since none of the pipelines were carrying gas to Denmark, the country’s security of supply was not at risk. However, leaked gas can entail safety and health consequences for travellers and also ignite above water and in the air, causing explosions.

Sweden reacted in a similar manner and issued a navigation warning, asking vessels to keep a “safe distance” from the five nautical mile radius.

The Swedish Maritime Administration also sent a warning for aircraft, introducing a safety altitude of 1,000 metres above the concerned areas.

Nord Steam 1 has the capacity to carry up to 170 million cubic metres of gas per day (or 55 billion cubic metres per year). Russia has been accused of manipulating flows after being hit with EU sanctions in the aftermath of the Ukraine war. Flows reached 20% of total capacity in the summer before the pipeline was totally shut down.

Nord Steam 2 was supposed to double this capacity to an annual 110 billion cubic metres.

Klaus Müller, the president of the German network regulator, said on Twitter the events underlined the regulator’s assessment that the situation is “tense” but added the EU was no longer dependent on the pipelines.

Kremlin spokesman Dmitry Peskov called the news was “very concerning” and said no option should be “ruled out right now,” including sabotage.

This article has been updated to include new reactions and developments.