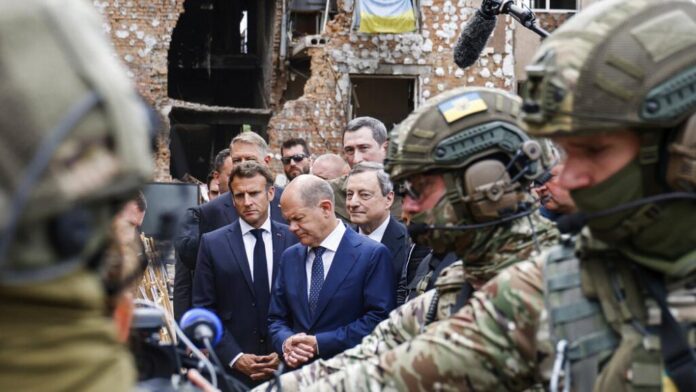 As the war of attrition continues in the east, the Ukrainian government came out with a  sobering assessment this week that Western sanctions are not damaging Russia’s economy as much as expected.

It will come as no surprise to those who have always been advocating stronger measures, especially in the energy sector.

At the same time, the European Union continues its strategy to find “trustworthy suppliers” who could do the job, as European Commission President Ursula von der Leyen said.

The EU also signed a gas deal with Israel and Egypt this week designed to further reduce energy dependency on Russia.

“It is for us very important and I’m very grateful that we are now discussing this fascinating project with that you are willing to increase the deliveries of gas to the European Union via Egypt,” von der Leyen said.

“You will bring from Israel via pipeline – hopefully one day a hydrogen-ready pipeline – to Egypt, it will be liquefied to LNG and then brought to the European Union.”

To what extent this connection will help Europe to diversify its energy mix still remains unclear.

Meanwhile, the leaders of France, Germany, Italy, and Romania traveled to Ukraine, in the highest-profile visit to the country yet since the beginning of Russia’s invasion and intended as a strong gesture of support.

And that support came in the full weight of the four countries being thrown behind the embattled country’s bid to join the EU.

“We all four support the immediate EU candidate status,” Macron told reporters in Kyiv on Thursday.

Von der Leyen also gave the Commission’s backing to both Ukraine and Moldova, recommending on Friday that EU leaders give them candidate status at next week’s leaders’ summit, paving the way for them to become fully-fledged members of the bloc at some point in the future.

“Yes, Ukraine deserves a European perspective. Yes, Ukraine should be welcomed as a candidate country. And this is on the understanding that good work has been done,” she told reporters in Brussels.

“But important work also remains also to be done. The entire process is merit-based. So, it goes by the book and therefore progress depends entirely on Ukraine. It is Ukraine that has it in their hands…And what could be better to shape your own future.”

Even if this is years away from now, the move sends a clear signal to Ukraine that the EU stands with it.

But the decision to grant candidate status requires unanimity between member states. And they are divided. Some want a quick process, to send a strong political message to Moscow, others are more reserved, however.

A Hungarian minister told Euronews on Thursday that it is ready to strike a compromise with Brussels to end the long-standing impasse that has blocked the country’s access to the EU’s coronavirus recovery fund.

“I am confident that this change, meaning my new ministerial appointment, could help give new impetus to the negotiations,” Tibor Navracsics, who was recently appointed as Hungary’s minister for regional development and the utilisation of EU funds, told Euronews on Thursday.

“Since Hungary is the last EU member state that doesn’t have an agreement with the European Commission on a national recovery plan, our goal is to speed up the negotiations as much as possible so that we can sign this deal by the end of the year.”

The Commission continues to refuse the approval of the Hungarian recovery plan over rule of law concerns that, in the executive’s view, remain unaddressed.

The concerns relate to systematic irregulates across the country involving corruption, cronyism, fraud in public procurement, and the allocation of public funds.