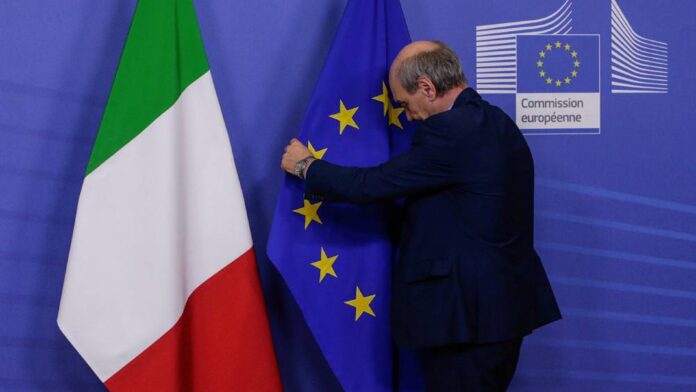 The far-right victory in Italy’s elections is likely to translate into Rome joining Poland and Hungary by adopting a eurosceptic stance on European Union affairs, experts have told Euronews.

“There will be definitely a shift in the positioning of the Italian government compared to the past two Mario Draghi governments,” Luca Tomini, a political scientist from Free Brussels University, told Euronews.

“I think what we need to expect is a more Eurosceptic position of the Italian government on several issues. There will be probably a realignment of Italy along with the government of Poland especially,” he added.

They came well ahead of a centre-left coalition led by Enrico Letta’s Democratic Party (26.2%) and whose platform was seen as a continuation of the policies undertaken over the past year and a half by outgoing technocratic Prime Minister Mario Draghi.

Meloni, who is likely to become the country’s first female leader, is now expected to helm the most right-wing and eurosceptic government Italy has had since World War II.

Draghi, who had successfully shepherded the eurozone through the turbulent euro crisis, was well-respected both at home and also across EU capitals. His short tenure at the Chigi Palace saw Italy take centre stage in EU discussions over the bloc’s post-COVID economic recovery but also over the best response to the Russian war in Ukraine and its negative consequences on energy prices and inflation.

A Meloni premiership may bring this approach to an end.

“Giorgia Meloni has always claimed that she wants to put Italy first, a bit like Trump’s America First, and stressed the importance of nation-states in the process of European integration,” Leila Talani, Director of the Centre for Italian Politics at Kings’ College London, told Euronews.

“We can expect more veto points and veto powers or expression of vetoes by this government,” she added.

Many EU decisions have to be unanimously approved by all member states, such as those that pertain to the bloc’s budget and to foreign policy including sanctions. Poland and Hungary have regularly threatened to veto important EU policies in order to obtain concessions from Brussels on other issues and Italy is now seen potentially following suit.

“The new government will look at the EU as a constraint, rather than as an opportunity to exercise influence beyond borders. It won’t have a clearly defined EU policy, also due to the major internal differences among its three party members and their respective EU political parties’ affiliations: ECR, ID and EPP,” Alberto Alemanno, a Jean Monnet Professor of European Union Law at HEC Paris, told Euronews.

“As the EU elections will soon approach the temptation for both Meloni within ECR and Salvini within the ID group to side with Poland and Hungary might become irresistible.”

“To sum up, Italy will no longer be a force for good within the EU but a free-riding member state taking – as opposed to giving – as much as it can, and ceasing to contribute to major decision-making. It will be transactional only, with no room left for solidarity,” he added.

Italy could clash with Brussels on a range of issues including rule of law, domestic civil rights, minority rights and migration policy.

The country’s recovery and resilience plan which Draghi negotiated with Brussels could also become a new battleground. It requires Italy to proceed with reforms of its administration and justice system in order to access €200 billion in EU funding.

“There could be changes in their approach to the reforms that were required by Europe to be able to get the money,” Talani flagged. “I’m a bit worried, especially for the competition reform.”

Meanwhile, what a new far-right government could mean for foreign policy and sanctions against Russia over its war in Ukraine, remains unclear.

“Meloni has also changed her political line in recent months, for example, with regard to policy toward Russia. This contributes to the unpredictability of the pro-European line of the future Italian government,” Arturo Varvelli, the head of the European Council on Foreign Relations (ECFR)’s Rome office, said in a note.

“The Meloni government’s foreign policy may well resemble something akin to the Draghi ‘national interest’ approach – embedded in international norms, albeit with a hard rightist edge to it.

“However, there is undoubtedly a risk that populist, anti-EU and anti-transatlantic forces could still sway the new government from this new course,” he added.