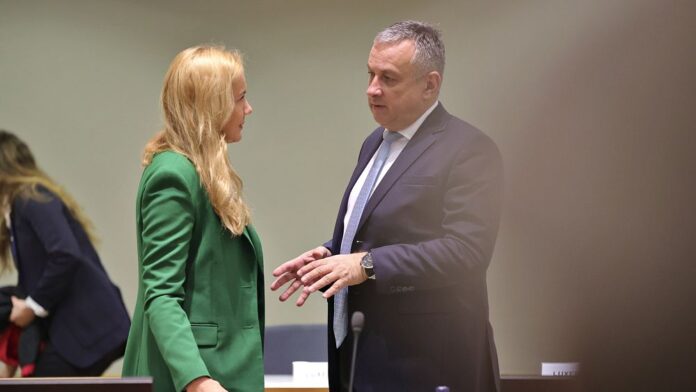 EU energy ministers criticised the European Commission’s latest proposal to establish the first-ever EU-wide cap on gas prices as unfit and a “bad joke” ahead of a meeting in Brussels.

Their strong disagreements over the price cap delayed the approval of two separate emergency regulations to tackle the energy crisis, where consensus had been already reached.

Her Maltese counterpart, Miriam Dalli, said the cap, as designed by the European Commission, was “not fit for purpose” and “definitely not dynamic in nature.”

“The concurrent conditions that are being imposed makes it improbable or almost next to impossible to actually trigger this corrective mechanism,” Dalli told reporters. “That is not what we asked for.”

Meanwhile, the Netherlands, a country staunchly opposed to any price intervention, said the instrument was “flawed” and potentially “harmful” to the EU’s security of supply and financial stability.

The Czech Republic, which holds the rotating presidency of the EU Council, intended to hold a discussion around the price cap and move ahead with two separate regulations: one about joint gas purchases and a second on faster-permitting rules for renewable technologies.

But a group of 15 pro-cap countries, which are deeply unsatisfied with the European Commission’s draft, pushed to link the price cap with the other two packages in order to secure amendments in their interest.

Luxembourg, Austria, Finland, Denmark, Ireland, Estonia and the Netherlands opposed this idea, diplomats told Euronews, but the Czech Republic accepted the compromise and will convene a new extraordinary meeting in mid-December to green light the three energy regulations.

At the core of the dispute is the draft unveiled just two days ago by the European Commission.

The executive has designed a “last-resort” cap that will apply to the Dutch Title Transfer Facility (TTF), Europe’s main hub for gas trade. The platform has seen abrupt ups and down since Russia launched the invasion of Ukraine and disrupted global energy markets.

The proposed cap will be automatically activated but only if two key conditions are met:

On top of that, the Commission introduced a series of “safeguards” that can outright suspend the mechanism in case of unforeseen and undesirable consequences, such as a drop in supplies or a loss of liquidity.

“We are ready to facilitate an agreement and help address concerns,” said Kadri Simson, European Commissioner for energy. “This is an extraordinary tool for extraordinary times.”

For the 15 member states who have spent the last months advocating for a forceful and far-reaching intervention, the conditions are so stringent and specific that the cap will be rendered powerless.

“The conditions seem to be designed so that the price cap is never enforced,” Ribera said. “This proposal might stimulate a hike in prices rather than contain them.”

For Ribera, the €275 mark demanded by the Commission is excessively high and static.

The bloc has only surpassed that barrier a handful of days during the summer when the TTF suffered record-breaking spikes. Current TTF prices have ranged between €115 and €125 per megawatt-hour.

“If we have gas prices of €275 (per megawatt-hour) during 15 days, Europe will never recover from that economic shock,” Ribera said, suggesting instead a dynamic price range with a premium attached.

Her Greek counterpart, Kostas Skrekas, echoed her comments and said Europe was paying “the most expensive natural gas in the world.”

France, Italy, Belgium and Malta also expressed criticism about the European Commission’s draft text and the tight conditions for activation that have been introduced.

Among the group of countries considered to be sceptical about price intervention, feelings were also mixed.

The proposal is “flawed” and carries a “lot of risks” for the security of supply and financial stability, said Dutch Energy Minister Rob Jetten. “I’m very critical but from a different point of view,” he said.

For Germany, a country whose main priority is to secure as much gas as possible to offset the loss of Russian supplies, the proposal goes in “the right direction” and only some “minor changes” would be required.

“For us, it’s critical that the safeguards are in place and we avoid the rationing of gas in Europe,” said Sven Giegold, Germany’s state secretary for the economy and climate action.

“The rationing of gas would be the wrong response for citizens and businesses in such a crisis.”

“The proposal on the table is OK, pretty much. But the measure has to be temporary and only work for extreme price hikes,” said Riina Sikkut, Estonia’s minister of economic affairs and infrastructure.

“Security of supply is paramount. Europe still has to be an attractive gas market. We cannot put that under question.”