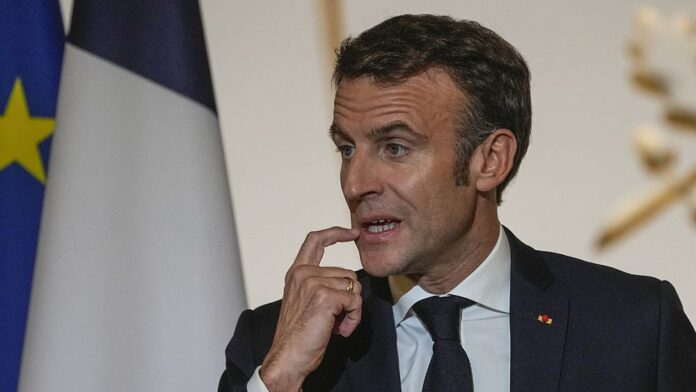 The West should consider how to address Russia’s need for security guarantees if President Vladimir Putin agrees to negotiations about ending the war in Ukraine, his French counterpart Emmanuel Macron said on Saturday.

In an interview with French TV station TF1 recorded during his state visit to the US last week, Macron said Europe needs to prepare its future security architecture.

“This means that one of the essential points we must address — as President Putin has always said — is the fear that NATO comes right up to its doors and the deployment of weapons that could threaten Russia,” Macron said.

“That topic will be part of the topics for peace, so we need to prepare what we are ready to do, how we protect our allies and member states, and how to give guarantees to Russia the day it returns to the negotiating table,” Macron said.

Macron’s comments have drawn criticism from some quarters, with the likes of Lithuania’s former minister of defence and foreign affairs, Linas Linkevicius, blasting the idea that concessions should be made to the Kremlin.

“Russia has all security guarantees if it doesn’t attack, annex or occupy its neighbours,” Linkevicius said on Twitter Sunday.

“If anyone wants to create a new security architecture that allows a terrorist state to continue its methods of intimidation, they should think again, it will (not) fly.”

Russia and the US have both said this week they are open to talks in principle, though President Joe Biden said he would only talk to Putin if the Kremlin chief showed he was interested in ending the war.

Ukraine says negotiations are possible only if Russia stops attacking and pulls out its troops.

Many in Ukraine and the West are strongly opposed to any negotiation with Putin that would reward him with concessions after nearly 10 months of the war, especially as Ukraine has driven back Russian forces from large areas in the past three months.

But Macron’s remarks suggested he was sympathetic to Moscow’s need for security guarantees — a demand that was the focus of intense but failed diplomacy in the run-up to the war.

On 8 February, Putin said at a joint news conference with Macron in Moscow that Russia would keep trying to obtain answers from the West to its main three security demands.

These include no more NATO enlargement, no missile deployments near its borders, and a scaling back of NATO’s military infrastructure in Europe to 1997 levels.

The US said at the time that the Russian demands were “non-starters”.