HomeNewsEuropeRescue ship with 659 migrants onboard to disembark in Italy
NewsEurope 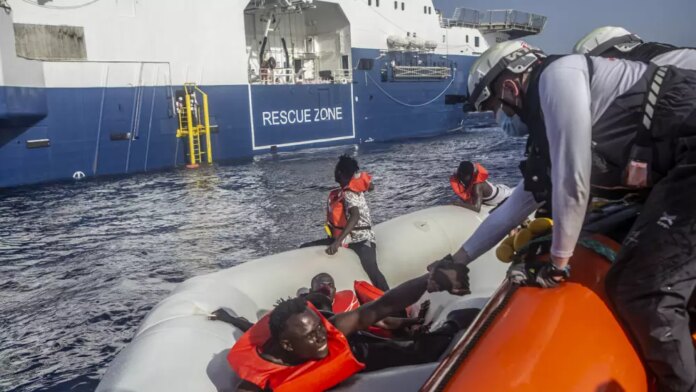 A Médecins Sans Frontières (MSF) rescue ship with 659 migrants on board has been allowed to disembark in Greece after nine days stuck at sea.

The Geo Barents vessel was denied docking multiple times by Italy and Malta.

Among the passengers were 150 minors and at least four people who were severely burned, suffered from water poisoning or from hypothermia as a result of their sinking on 27 June.

In recent weeks, MSF, SOS Méditerranée and Sea-Watch have rescued thousands of people from overcrowded boats in poor conditions. They are now calling on the European Union to take action.

They want a European search and rescue mechanism at sea to prevent tragedies and save lives.

“What we would like to see from the European Union and the European states is a centralised, coordinated, organised mechanism that would have the capacity both to carry out this coordination, but also to carry out rescues in the whole of the central Mediterranean in order to save more lives,” Xavier Lauth, director of operations for SOS Méditerranée, said.

A moment of ‘collective awareness’

Since the EU ended search and rescue operations in the Mediterranean in March 2020, such initiatives have been left to the discretion of states. But NGOs say many are ignoring distress calls or even collaborating with Libyan authorities to send asylum seekers back.

Rescue missions are mainly carried out by civil society, such as NGOs, as well as by commercial vessels such as fishing boats, which “carry out rescue operations as best they can, with the means they have”, Lauth stressed.

In the space of five days, two search and rescue vessels, the Geo Barents and the Ocean Viking, chartered by SOS Méditerranée in partnership with the Red Cross, rescued 16 boats in distress.

For Xavier Lauth, this period of increasing numbers of attempts to cross the Mediterranean is an important moment of “collective awareness”.

“I absolutely think that these strong moments when Europe as a whole, and all European citizens, become aware of the seriousness of the situation in the central Mediterranean are key moments to call on the States and to call once again for this coordinated rescue mechanism at sea”.

The central Mediterranean is the deadliest migration route in the world, according to the International Organisation for Migration. It estimates that almost 20,000 people have died or disappeared since 2014 while trying to cross it.

The European Union Agency for Fundamental Rights (FRA) meanwhile said in late June that since January, an average of five people a day lost their lives while attempting to cross the Mediterranean Sea to reach Europe.